I have very fond memories of the 1973 oil crisis.
There are many reasons to abhor the oil embargo that led to shortages of gasoline and other modern necessities, and indirectly to the economic woes of the rest of the decade: stagflation, rising national debts, and all the rest of it.

I was oblivious to all that grown-up stuff, but I was old enough to know that something momentous had happened, and that it was worth remembering.

At the time, we were living in the Netherlands, which was one of the few European countries targeted by the oil embargo. My fond memories of the time revolve around the car-free Sundays that the government had instituted in an effort to conserve gasoline. There was a nation-wide ban on driving, with the exception of the police, the fire departments, and medical personel on emergencies. 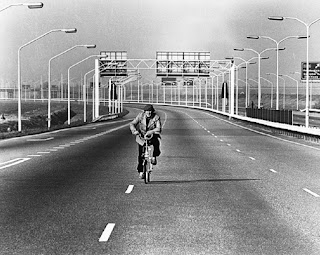 For the entire winter of 1973 and the following spring, every Sunday the streets turned into a party ground. Suddenly, it was okay to play soccer and badminton, and jump rope in the very middle of the street. After a lifelong brainwashing that the only safe place for children was the foot path or the bike path, occupying the middle of the street gave an indescribable thrill of illicit pleasure, made even more intense by the limited time that such heretical behaviour was okay. On Monday it was business as usual.


But on those Sundays, my friends and I were out biking blissfully in all the places where we normally weren't allowed to go. Some of us ventured out on the newly built highway at the edge of the neighbourhood. In-line skates had just been invented (or anyway, had just become available in the consumer market) and my dad, usually tight-fisted, actually bought me a pair. I spent entire afternoons deliriously sweeping over the highway asphalt that was so much smoother than our brick-paved street.


This Saturday is World Car-Free Day, which is on 22 September every year.


Ahead of this, several dozen cities in Europe have been celebrating Mobility Week, which means getting around on your own power. Last Sunday was car-free in a number of leading cities. Just google images on "car-free brussels" and feel the party atmosphere. It helped that they had a sunny Sunday.

Car-full vs. car-free on the same street in Brussels;
via European Cyclists' Federation

Personally, I can't observe Car-Free Day on its appointed date; I have a scheduled pickup to do that I can't move to another day. But why should that stop me? Since my town is quite oblivious to World Car-Free Day, it sort of doesn't matter when I do it for myself: so I am calling today my personal Car-Free Day.


I can do this because we are part of a three-family school commute share, so while on some days my car is filled to capacity, this year I'm not responsible for driving on Mondays and Fridays. If I play my cards right, I could in principle have at least two car-free days every week. Now there's an enticing idea: I think I'll start playing my cards that way now.


Any way you can fit a car-free day in your weekly schedule?