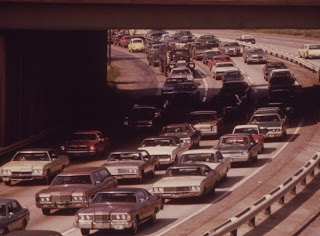 I like to keep things simple, so I leave out the time spent for repairs at the garage, time spent at the hospital after any accidents, time cleaning the car, and so on.

NPR reports that the average price of a car in 2012 is right around $30,000. Let us consider the popular Toyota Highlander SUV as a typical car in that price range. The base MSRP is $ 28,870, and the total cash price including taxes and such, as reported by Edmund's (for ownership in Cambridge, MA) is $ 29,067, a little less than the average car price of $30,000.

The good people at Edmund's have also calculated that the True Cost to Own this car for 5 years is $ 48,046. That includes financing over 60 months, taxes, fuel, maintenance, insurance trade-in value at the end of the 5 years: everything. They assume you drive 15,000 miles per year, not that different from the 13,500 mile average reported by the Federal Highway Administration for 2011.

The US median income was $ 50,000 for 2011 ("median" means that half the Americans made more than this, and half less). Total income taxes for this middle income segment was approximately 25%, so the median take-home pay after taxes is $ 37,500.

Put another way: we spend 20 hours every week either actually driving, or working so we can afford to drive. This is the average for the overwhelming majority of us, who don't even drive for a living like truck or taxi drivers do.

You wonder if we wouldn't be better off spending that time biking. We would be healthier. We would keep the air cleaner. And we would slash our carbon footprint by 25%, making the planet healthier.

Working Weekday vs. Car-Free Sunday on the same street in Brussels;
via European Cyclists' Federation

You may also like:
1. The Carbon Footprint of a Car
2. How the Dutch got their Bicycle Paths