What six weeks of New Car Smell looks like

It had been three months since I first drove our new car home from the dealer. In one of those flashes of inspiration, I parked it nose-first in the car port (we don't have a garage), so that its nose would stay in the shade, but its rear would be basking in the afternoon sun. I left one of the front windows open by about a half inch. Then I locked it and went away for six weeks.

The idea was that all the plastic components in the car interior would proceed with the outgassing of their various toxins while my family was riding bikes elsewhere, and that the new car smell, not very strong to begin with in this car, would be much reduced when we got back. The sun warming the rear of the car would speed the process a bit. And I hoped that most of the toxins would escape through the open front window.

This is what I found when we got back. 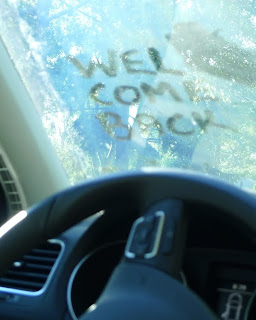 This was one of those experiments that I wish hadn't worked quite as well as it did. I fought back a freak-out feeling and drove the car out into the sun before writing the words with my finger and taking the photo. The haze, which was all on the inside, was much thicker than I expected, and what's more, it was mighty hard to remove.

My usual approach, a mild soapy solution, took off only part of it. I switched to dishwashing liquid diluted with just a bit of water, that took off most of the rest. But there were still greasy-looking streaks all over the inside of the windshield, which would be consistent with the deposit consisting of long-chain hydrocarbons. When lit by the sunlight just so, it was going to reduce my view through the front window, and it was going to give me an uncomfortable reminder of just how successful the experiment has been. I sighed, and went inside to dig up the ten-year old bottle of grease-cutting Windex that's bad for your in other ways but was still lurking among my cleaning supplies. That finally took off the last of the haze.

I can only hope most of it went out that open window, but I can't tell. Neither can I tell what exactly was in that layer of gunk inside the windshield without one of those cool portable spectrometers that help you analyse materials in situ. But I have an educated guess: it's some combination of plastic softeners and flame retardants escaping from the upholstery and such, the gases that together give a new car that "new car smell" that is so attractive to some new car owners that they try to find ways to preserve it. Those gases are actually dangerous to your health.

You know how a glass filled with iced water will frost over on the outside? It's because the outside surface of the glass is cooler than the ambient air, and water vapour condenses on it preferentially. The same thing happened in my car: the gases released by the plastic components inside the car condensed on the coolest surfaces around, mostly on the inside surfaces of the front of the car. The rear windows had much less of a deposit, since that part of the car was heated by the sun, unlike the front which was tucked under the carport and stayed relatively cool.

So now, on every sunny day, the car stands in the middle of the driveway, in the full sun, with the windows wide open so the gases can escape instead of depositing themselves on my windshield. Fresh air is our friend.