On this summer holiday, I had a chance to try out the 1.6L diesel engine that is not available for the VW Golf in the USA. Make no mistake: I don't mind feeling the occasional kick in the lumbar region in our 2.0L Golf TDI (at least, when neither the cello nor the children are in the car); but it's obvious that the 2.0L is way too much for a car the size of a Golf, and I would have jumped at a chance to buy the 1.6L TDI if it were for sale in the US. 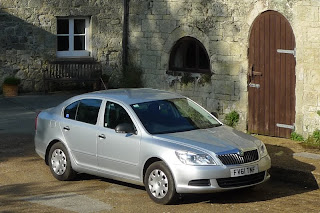 So on our UK holiday I went for a Škoda Octavia of the Czech manufacturer, which shares a platform with the VW Golf, and does come with that 1.6L diesel engine. It is significantly larger than the Golf in all three dimensions. Its 4.57m length is closer to that of the VW Passat (4.77m) than that of and the Golf (4.20m), as is its general aspect ratio. 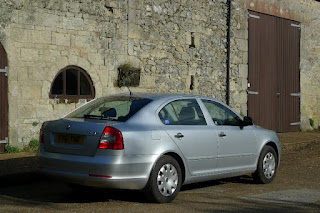 I was grateful to be able to close the front door while properly seated in the driver's seat (which I can't do in a Passat, nor an Audi A4). But I'm starting to suspect that car seats are built deeper in Europe than they are for the US market, West-Europeans being among the tallest people in the world: the backs of my shins just never quite clear the seats, and I could have done with a small pillow.

So it was very nice that the transmission was so forgiving. The steering wheel was, of course, on the right hand side of the car. We got befuddled by the map and lost our way. Lanes were narrow and traffic fast. In short, plenty of opportunities for the multi-tasking required for driving to break down. But the mellow transmission bailed me out every time I needed it to.

The kerb weight of the Octavia is nearly 10% less than that of the Golf. As I suspected, the 1.6L diesel engine has plenty of torque to move this car, loaded though it was with all four of us plus luggage. If I was at the front of a row of cars, it was because I was unwilling to get the car scraped on its sides (more about narrow lanes in a minute), or because we were lost - anyway not because the engine was labouring to keep speed.

We tend to travel light, and our luggage rattled around in the cavernous trunk, which could easily accomodate two cellos. The back hatch swivels at roof level, so once the back seats are folded down it's super easy to load in large pieces, a marvellous solution to the usual conundrum with sedans where the small trunk cover still prevents you from loading large pieces which can in principle fit in the car with the rear seats down. 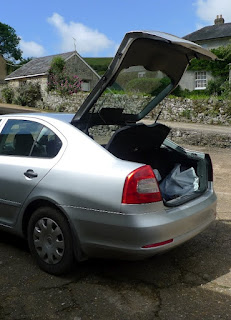 However, the price you pay for this versatility is that short people like me end up looking ridiculous jumping for the edge of the hatch every time it needs to be closed. There is a rubber pendulum with an uneasy resemblance to a uvula (the thing that hangs down way in the back of your mouth), that you can grasp to pull down the hatch - but it's still a stretch for me, and if I use that I need a second hand to actually close the hatch. Now, when you're closing that hatch, you usually have something in your other hand: a cello, or beach gear, or a suitcase. So you just need to be tall enough for this car. 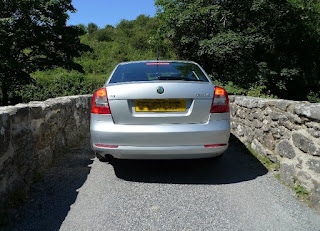 In general, as it turned out, the car was too large for our holiday. Since we're not camping, my family of four could easily have fit in something significantly smaller. I should have remembered that the only time I had a grazing encounter with an oncoming car occurred in Devon. That time we were in an Opel Vectra, a wagon of impressive width that just fit all our camping gear. Its side mirror got shaved off by an oncoming BMW going a bit fast on a Devon road that was much too narrow for beeming. People who know, like locals, go for more modestly sized cars; the owners of the cottage where we stayed have two: the larger one is a Ford Focus; the other one is significantly smaller. Smart move. 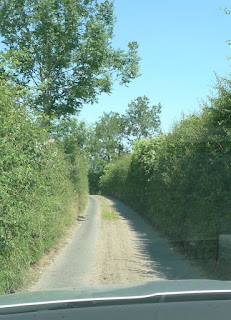 Because in Devon, even "A" designated roads are not all that wide, and on Dartmoor a "B" road is actually 0.8 lanes tucked between carefully manicured hedges. I speculate that if they're behind on the hedge cutting maintenance they would have to detour the traffic. Every 300 metres or so there is a lay-by, where the road broadens to 1.5 lanes, and you puzzle your way past any oncoming cars, taking one or two back-and-forths if required. 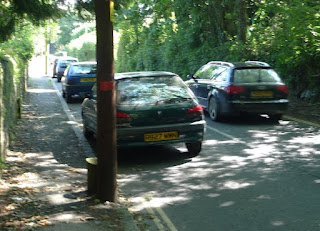 This mode of transportation seems to be so attractive to Brits that even in towns, where roads officially have two lanes, they still manage to turn them into effectively one-lane roads by allowing road-side parking. These are old roads, flanked on both sides by a row of houses; the sidewalk is barely two persons wide and sees a lot of use, so the only place for parking is on the road. It is far from unusual to see a row of parked cars on the left, with a car squeezing by on the right lane, which is the wrong lane. Basically you end up alternately dodging parked cars and oncoming cars. While this may be a charming, if slightly scary, way to get about when you're a tourist, it's not all that amusing for natives who don't have all day to get from A to B and who will play the chicken game at every row of parked cars, squeezing in just before the guillotine closes between the last parked car in the row and the first oncoming car. It goes without saying that this game of chicken involves a great deal of acceleration and braking. And all this while driving on the wrong side of the road, and with the shift stick in the left hand. Dextrous people, those Brits.

Don't get me wrong, I'm not complaining. We are completely in love with Britain in general, and Devon in particular, and we'll take it, wild traffic and all. All this is just to say that for many of the miles on this holiday I've been in third gear, often slowing to second or even first, and on several occasions going into reverse when the only place to pass oncoming traffic happens to be behind me. Even so, at the final tally after nearly 900 miles, it transpired we had done 47 mpg in this car under these trying circumstances. That's about the average reported by British owners of this model car with this engine, but I'm sure I could do significantly better on home turf, in small-town USA where roads have two full-sized lanes and are wide enough for three, and driving styles are mellower.

The Škoda Octavia with the same 1.6L TDI engine also comes in a Greenline II version which has a suite of fuel-economy enhancing technologies; the equivalent package is known as Bluemotion for Volkswagen vehicles. This version gets a real-life 51 mpg as reported by its owners. Its higher price reflects unspecified upgrades in the trim level (compared to the S Hatch trim) that are opaque to figure out, so only some unknown fraction of the £ 1,475 price difference can be ascribed to the fuel efficiency enhancement technology.

IF this were the only way to get that sweet 1.6L engine (especially with the Greenline II option) I would buy this car. But I would retrofit the hatch so it doesn't open quite as high. Better yet, I would go for the Estate, or wagon, version which is a proper hatchback. But it would be too big. The truth is, what I really want is a 1.6L Bluemotion Golf. With its proven 52 mpg.