Did a double-take the other day: There was a Ford Focus of the hatchback persuasion, but it wasn't a Ford Focus. Its sleek body was elongated at the back, and a quick peek into its trunk showed it was cello-worthy.

After 2007, Ford stopped selling the Focus Station Wagon in the US, and now offers only a sedan and a 5-door hatchback. In Europe, they don't sell the sedan version, but they do offer the 5-door hatchback, as well as the Station Wagon (which is called the Estate). And that is what gave me the double-take. 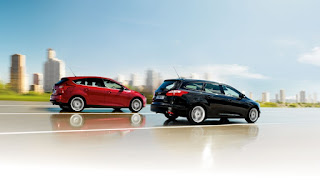 Stateside, your choice of engines is limited to the 2.0L gasoline injection engine, the 2.0L EcoBoost engine (only available on the "sporty" ST version), and the electric engine on the version whose MRSP, $39,200, is twice the $19,200 price on the basic hatchback (SE 5-door) version.

If you bought the Focus in Great Britain, the engine menu shows 14 choices, of which eight are diesel engines (the electric Focus is scheduled to arrive on the European market later this year). The table below shows a selection of the 14 engines as well as the US options for the hatchback, to compare apples to apples (pricing shown for Zetec trim on UK models). Of course, the same engines are available for the Estate / Wagon.

To get a European Focus fitted with a 2.0L engine, you would have to buy the Zetec S trim (just under the Titatium trim). The more basic Edge and Zetec trims come with at most 1.6L under the hood. But those are worth considering.

Firstly, there is the sweet and frugal 1.0L EcoBoost, the tiny sibling of all the larger EcoBoost engines introduced by Ford to the US recently, which still manages to deliver 123HP. Start-Stop technology gives the fuel economy a nice boost, to a real-life 37mpg.

So far the 1.6L Duractec diesel is proven on the road to be the most frugal, getting 48mpg. Just to be clear: this is not a hybrid. You can tell, because it doesn't have the hybrid price tag.

But for fuel efficiency, you want to go with engines from the Duratorq series, which have proven their worth in Ford's other European models. The 1.6L Duratorq diesel is too new for real-life data, but is quoted to get 23% higher fuel efficiency than the 1.6L Duractec. Since it comes with the same price tag, the choice is clear.