Drive like your life depends on it - it does.

My youngest uncle is deaf. An ear infection took out his hearing when he was a child, but, extremely personable and gregarious, he never let the lack of hearing keep him from talking to everyone. He speaks several languages and can lipread at least two.

He also loves cars. He has special relations with several dealers in his city, who often let him take a car out for a week-long spin. Like many car lovers, he's a very good driver. As a passenger you're totally safe with him - as long as you don't strike up a conversation. Because the only way he can "hear" what you're saying is to watch your lips. Even when he's doing most of the talking he still needs to check to see that you're not trying to answer. This is usually when my dad stops him short, telling him rather brusquely (after eight decades my uncle is still just his little brother) to keep his eyes on the road. And not to drift out of his lane.

I had cause to think of my uncle this week, as in the course of a single day I encountered no fewer than five lane drifters (and I covered hardly twenty miles that day). It's hard to know what to do when you're on a two-lane road and the car coming towards you is slowly but steadily veering over the middle line. Either those drivers were completely sleep-deprived and ready for some shut-eye, or something else is keeping their eyeballs occupied.

It's extremely unlikely to encounter, over twenty miles, five deaf drivers who were lipreading their passengers. But there are plenty of distractions in a car even for those of excellent hearing. 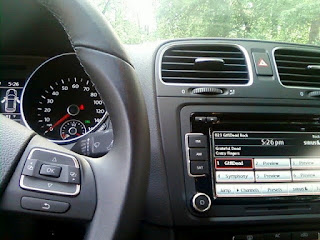 Many new cars come equipped with a screen that facilitates your connectivity, from radio to navigation to full-blown internet connection. The multiple functionality requires touch-screen operation. But its virtual buttons don't stick out like real buttons do: so you need to look at the screen.

Even without a fancy screen on the dashboard, you can still get plenty of distraction from your cellphone. This one is even more dangerous: for instance, texting requires not only your eyeballs but also both your hands - for all but the most dextrous teenagers. Yet a frightening percentage of drivers (and more than half of teen drivers) admit to texting while driving.

Look. There have always been plenty of distractions in the car. The children in the back seat. Your new boyfriend/girlfriend. Your audio book. The good looking truck driver in the next lane. But none of those required your eyeballs and both your hands.

As states are dealing with the rising number of accidents, some fatal, caused by drivers texting or otherwise distracted, increasing numbers of them are tightening the laws on distracted driving: look up the rules for your particular state on distracted.gov.

In addition to running pilot projects for increased law enforcement on distracted driving, the Department of Transportation is laying down federal guidelines for carmakers to limit the distractions built into the dashboard. Among other things, the guidelines call for tasks that require visual-manual coordination to be allowed only when the car is in "Park" mode.

While they're at it, they might install a reaction time meter (e.g. a game you play on your fancy screen) that prevents you from starting the car if, say, you got sluggish after a stint at the bar.

Here's my pep talk about cell phones and cars: The very highest-end vacation resorts now offer a connectivity-free environment where executive types pay a premium for the privilege of really getting away from their work: sorry, they can't be reached, there's simply no signal on their iPads and Blackberrys and such. Remember: your cell phone is not your ball and chain, and you don't have to be available at its every beck and call.

Think of yourself as the executive of your household, and think of your car as your privileged resort, your haven where you don't take calls, texts and other intrusions: it's just you and your thoughts (or your favourite music; but the choice is yours, not one imposed by the outside world). Your cell phone belongs in the trunk. Calls and texts can wait until you get to where you're going - safely.

Especially with children in the car, you can't afford to engage in distracted driving: you don't want them to follow you down that path when it's their turn to get behind the wheel.

Never forget: every car is potentially a lethal weapon. Let us wield it with the utmost care and respect.

You may also like:
1. Asleep at the wheel
2. Seven Ways to Keep Your Teen from Texting While Driving