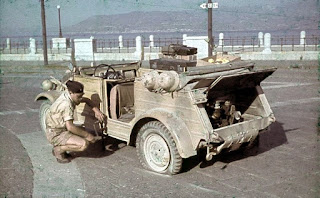 In World War II, the Kübelwagen was the German answer to the American Jeep. Designed by Dr. Porsche at the request of General Rommel for the German army's desert operations, it was based on the Beetle, handled well on rough terrain despite not having four-wheel drive, got great mileage (important for an army that was constantly short on fuel), and sported an air-cooled engine (great because in the desert armies were also constantly short on water).

It had another unprecedented feature: the bucket seats were so comfortable that they made it into the vehicle's nickname (this was, after all, a Porsche design).

I was reminded of the Kübelwagen by the largely unprecedented events in the 2017 White House transition. In fact, it wouldn't surprise me if "unprecedented" became the word of the year in the United States.

Unless you have put yourself under a rock following the November 2016 election, you almost can't get away from the ongoing blow-by-blow account in the media of the adventures of the president-elect and his cabinet appointments. So I won't get into that here. I will just summarise by noting that many of the things they are doing have been characterised as "unprecedented".

There have been so many instances of "unprecedented" moves, that commentators have started to draw parallels to the rise of Putin, Erdogan and the Führer at whose behest the Kübelwagen was designed. I list a selection here. These are all long reads, not suitable for glancing at on your phone while, say, waiting in the cashier line at the grocery store. These need your full attention. You need to give that attention. Also you need a good long walk in the woods afterwards.

" We’re heading into dark times. This is how to be your own light in the Age of Trump"
Sarah Kendzior, The Correspondent

"10 Ways to Tell if Your President Is a Dictator"
Stephen M. Walt, Foreign Policy magazine


" Truth is a lost game in Turkey. Don’t let the same thing happen to you"
Ece Temelkuran, The Guardian

You will notice, if you actually read these pieces, that every single author is concerned about freedom of the press, and the need for truthful reporting on which a real democracy depends. So it's only appropriate to end with a piece on Steve Bannon, Trump's handler - sorry, his "senior counselor" - who used to run the fake news site Breitbart, and who describes himself as "Thomas Cromwell in the court of the Tudors".


When you are done reading, I hope you will join me in subscribing (or renewing your subscription) to good news sources that tell the news like it is. Because reliable news is more than worth paying for. Finding them is actually easier said than done, but my list includes the Washington Post, The Guardian, Democracy Now, the Financial Times, and I'm contemplating Teen Vogue: since Lauren Duca's piece is not the only worthwhile article they publish. Besides, it's only $10 a year. The Financial Times is quite a bit more than $10 a year, and worth it.

Meanwhile, it is good to remember this: while innovation invariably includes aspects that are unprecedented, simply doing unprecedented things doesn't necessarily lead to innovation. And certainly doesn't always lead to "winning" (the word that dominated the 2016 presidential election). After all, Porsche's Kübelwagen notwithstanding, in the end Rommel lost North Africa.

Please share your favourite reliable news source in the comments!

You may also like:
1. Getting Ripped Off At The Pump
2. Three Climate Change Documentaries to Watch
3. Martian SUV