"Hey, I wonder who filled the tank?"

I'm so used to be the one taking care of the car that it comes as a pleasant surprise when someone else in the house takes on a task, even if it's a matter of pulling up at the gas station. What tipped me off was that the gas log we keep for the car seems to be missing a month.

I skipped a line to record the current fill, hoping to recover the sales slip from the previous fill. I'm a geek and love to record data - even if that data is just the gas usage on my car. At every fill, I write the date, the mileage, and the gallons put into the tank. 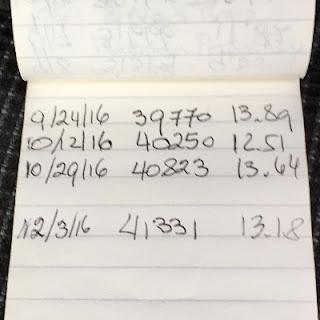 But it turns out nobody had taken a turn filling the tank but me. The last fill really did happen at the end of October, and I had simply skipped over the month of November. That makes 35 days between fills.

While I go around bragging that I fill my car's tank once a month, that actually only happens on quiet months. In October we had two sets of houseguests from overseas, and we took them to see the sights - in the car, of course, as that is part of the American experience. Between that and shuttling to the airport, I had to fill the tank every other week. So 35 days between fills feels good.

Yeah, I know: the world is getting off diesel. Our next car is probably going to be electric. Until then, I like the one that requres a fill only once a month.

You may also like:
1. "I Go to the Gas Station Once a Month"
2. Getting Ripped Off At The Pump
3. How to buy a gas sipper for less