Getting Ripped Off At The Pump

There's an ongoing debate about whether or not your car really needs premium gasoline (for which you pay premium prices). The American Automobile Association has done helpful research that says that, unless the car is built for premium gasoline, you don't need the more expensive fuel. It's a waste of your money. Apparently Americans collectively pay more than $2bn too much every year for premium gasoline our cars don't need. 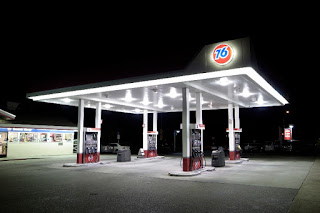 But never mind that: the discussion around super unleaded masks a much bigger rip-off: the one you commit to when you buy your car.

Not that your purchase price is too high. On the contrary, buying a car is nowhere cheaper than in the US. No, the rip-off happens after you drive off the dealership lot, the first time you stop to fill the tank. And every time after.

The reason is that car manufacturers like to sell you big cars, with big engines: those are the ones with big profit margins for them. They don't care about your pocket book, only the corporate bottom line.

They have big slick marketing campaigns that extol the bigness of the car and the bigness of the engine. They run those over a big time frame (like, decades). Then they say, "Americans WANT big cars." Because big-scale brainwashing is effective, and corporation know, better than your mom, your kids or your ex, how to push your buttons. I'm a mom, and I know I don't hold a candle to the corporate button pushing savvy.

The upshot is that the average fuel efficiency of new cars is around 25mpg in the US (as of January 2016). 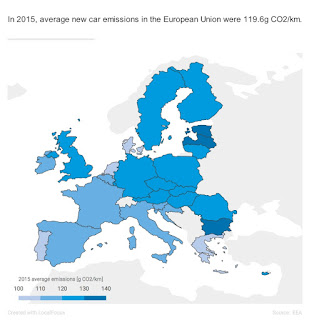 New cars sold in Europe in 2015 had average carbon emissions of 119.6 g CO2/km. That's just how they measure fuel efficiency; after all, it's all about reducing carbon emissions, right? Using this handy unit converter, it's easy to figure that comes to 45.6mpg.

So that's the official European number, which as everybody knows is inflated. The real, on-road mileage is about 20% lower than that, or about 36 mpg.

Get this: the average European new car does 36mpg.

Suppose you're the average American doing 14,000 miles a year in the average new car. That car requires 560 gallons to cover that distance. At today's gas prices, around $2 a gallon, your yearly fuel cost is $1120.

If instead you drove the average European car, your 14,000 miles would require only 389 gallons of gas, which costs $778.

So you could save $342 every single year (that's 30%) by driving the average European car rather than the average American car. Multiply that by the 200+ million passenger cars on US roads, and you end up with a potential savings - to drivers, to you and me together - of $68bn a year. You can see why I scoff at the $2bn we waste on super unleaded.

And that's at this year's low $2 a gallon price. Once the gas price rises past $4 a gallon again (as it will), you and I together can save more than $140bn a year. Think of what we could do with that kind of money.

So yes, European cars are smaller: but they still carry people's families in comfort, and the smaller size makes them easier to park.

But I tell you how to leapfrog the average European car: by going electric. At 25mpg and a gas price of $2 a gallon (a steal!) you're still paying 8¢ a mile for your carbon spewing conveyance. But suppose you traded in that internal combustion car (so twentieth century!) for an electric vehicle. The Nissan Leaf takes 34kWh to run 100 miles. At the national average of 10.4¢ per kWh, that comes to 3.5¢ per mile.

By going electric, you can cut your per-mile running cost by more than half. Switch your home electricity to a renewable energy supplier, and you're a climate hero! Generate your own electricity with rooftop solar, and you can be a climate superhero, for literally the price of a few peanuts per mile.

You may also like:
1. CAFE 2025 fuel efficiency rules: a real shot in the arm, or just a babycino?
2. Why are cars so small outside the US?
3. How much horsepower do you need?