My car is now a few years old, and has lost the new car smell. Even so, at the end of the summer there is still a film on the inside of the car windows. It could be residual outgassing from synthetic components still depositing itself on all the inside surfaces, even though you can't smell it any more. It could be simply being on the road.

Whatever it is, it looks kinda disgusting, and what's more, it's dangerous, as the film lights up when hit by sunlight, so you can't look through the windshield.

I didn't really feel like using Windex again, nor was I in the mood for vigorous scrubbing with dishwashing liquid. Internet to the rescue! There's bound to be someone who has figured out a safe way to clean new car gook off your windshield.

It's fun to read people's homemade solutions (no pun intended) and try to figure out the chemistry of what makes it work. I settled on a recipe from Crunchy Betty, who is seriously into clean: clean food, clean toiletries, clean house. By "clean" I mean chemically clean. 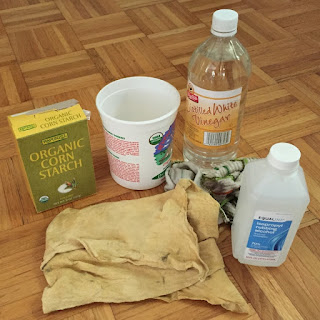 This one has water (that's safe to drink); rubbing alcohol (that's not safe to drink but you can handle it with your bare hands); vinegar (I put that in my food regularly); and corn starch (I bake with that). I like it when a cleaner contains only stuff I have in my kitchen anyway, and is free of ingredients I can't pronounce.

The corn starch is the unusual ingredient. Water is the universal solvent; alcohol and vinegar are pretty good solvents, each for its own kind of dirt, but corn starch? If you understand the chemistry of it, please explain to me in the comments.

Whatever. The point is that it works. Does it ever work! As described by Crunchy Betty, you get a gleaming glass surface with no streaks.

I scrubbed the glass with a cloth dipped in the magic solution, then wiped with my trusty chamois cloth. If you're a vegan, you may be squeamish about using a chamois cloth which is basically the inside skin of a goat, sheep or deer, but there's nothing like it for window cleaning. And they are strong. I've had mine for nearly ten years; it's got stains and spots but still the job as well as ever.

I could get into that.

Anyway. If we had another car I would have done that; but we only have the one. So I went into the house and cleaned the window in the front door. Then the windows in the living room. Then the cleaning solution started to look a little dark (oops) so I had to quit.

Apparently our home windows collect something that this particular combo of solvents wasn't quite able to dissolve. I think I will do the usual, with dishwashing soap and a scrubber sponge, but I then follow it up with Crunchy Betty's magic solution, before drying.

But it's not everyday that I run into a cleaner so good that I actually go looking for more things to clean.

This one is worth it. Find the recipe here.

You may also like:
1. New car smell: good, bad or ugly?
2. What six weeks of New Car Smell looks like
3. How to Save Water (and Work) When Washing Your Car