"Urban Heat" sounds like a cool name for a band. Unfortunately it's nothing like that. In fact, it's not exactly cool. The "urban heat island" refers to the fact that the average temperature of a large city is higher than the surrounding rural area. Sometimes, quite a bit higher.

This is because a lot of energy is used in cities, for transportation, heating, cooling, lighting, running computers, washing machines, coffee makers and all the other machines that make modern life possible. And once that energy has done its job, it turns into heat.

And that's even before taking into account some other things that make it worse, like the lack of cooling trees, and the presence of dark asphalt and rooftops that are very good at absorbing heat from the sun. So there is more than fresh air that makes it so "refreshing" to get out of the city and into the countryside.

Urban heat is hard on cars. On a nice sunny day cities can be warmer than the area around it by up to 27F (15C). And if you park your car in the sun, it can get hotter still. 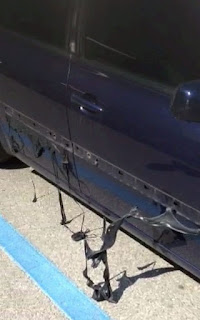 This hapless Megane got stuck in a confluence of unfortunate circumstances: Its owner had parked it in the sun, on an asphalt lot, in an Italian town, right when a heat wave hit it in August 2015. Oh, and the car was dark blue. Outside, the temperature was in the high 30s centigrade (38C =100F), and since a car is a nice greenhouse under any circumstance, the temperature inside the car must have shot way up: high enough to cause the plastic parts on the car to melt.

This photo makes me wonder what the inside of the car must have looked like. I imagine the radio could have looked a bit like Dali's melted clock. In fact, any electronic part must have suffered immensely. And think of all the plastic parts from the carpeting to the wire insulation. So there's another reason to leave you car out of the city, at least on very warm and sunny days.

Here is a cool interactive graphic from the amazing folks at Climate Central, illustrating the urban heat effect for an urbs, that is to say a city, near you.

Go ahead: give it a spin. Then, next time you go downtown on a hot day, take the train or bus. It keeps one more heat engine off the streets, and spares your car the wear and tear of being in a furnace. Not to mention the risk of melting its electronics.

You may also like:
1. EV Battery seeks TLC for Long-Term Relationship, Hates Temperature Extremes both Cold and Heat
2. How you pay for car features that you don't need
3. How to Save Water (and Work) When Washing Your Car