Car Ownership Is So Twentieth Century

"Surely you're taking the car?" says my dad.

It's summertime, we're in Delft, the Netherlands, where my dad lives, and we have this conversation every other day: My dad is forever offering us the use of his car. At first we thought he was being very generous. Then we started wondering, why the insistence that we not take the bike, or the train? You'd think that after we'd said No Thanks about two hundred times, he'd get the message. But he persists. And now that we have my aunt's car on loan, he's even offering us the use of her car, which is kinda funny if you think about it.

From the time that Henry Ford started making cars affordable (which was only a few years before my dad was born), car ownership has been the aspiration of everyone on the planet. Even if it was the Fiat 500 (tiny at the time it was introduced), you got a car as soon as you could afford it.

But even as millions of people in places like China and India, who are just arriving into the middle class, aspire to car ownership, those who have been in the middle class for a while are starting to look beyond. 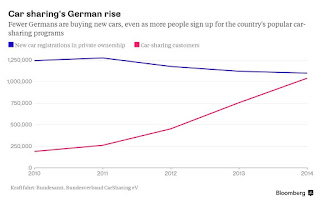 These people tend to live in high-density places where public transport is good, roads are friendly to pedestrians and cyclists, and where space is scarce. In Germany, for instance, the number of people signed up for car-share programs in a given year will soon be larger than the number of people buying new cars. It helps that the dominant car-share programs are offered by BMW and Daimler.

I can get into that. When we are with my dad in the Netherlands, our go-to transport is our bikes. That gets us all around Delft, a city of 100,000. Parking is expensive, and getting into the medieval downtown core is much easier and faster on a bike than by car. On top of that, residential parking spaces are few, and minuscule. Getting in and out of the car is often a matter of bending your body into impossible configurations to sidle out of the crack afforded before your car door bangs into the next car. All in all, bikes are easier to use. For going out of town, I love to take the train.

It is only for visiting relatives who live outside the immediate town centers that we take a car, especially when my dad comes along with us: at his age, he wouldn't do very well on the two wheels offered by a bikeshare. Today, I brought away some boxes filled with items for the local recycle store, and I used the car for that. (That is to say, my aunt's car).

The cello is a bigger deal. But if I took the bus to the music school downtown for the weekly lesson, I wouldn't have to pay for parking. CelloPlayer would have the youth discount on the public transport pass, so it would be even cheaper for me not to have to drive my child to cello lessons. What a deal.

If I lived here I'd be using a car-share too.

You may also like:
1. Eight Ways to Catch the Train - None by Driving Your Car
2. Why are cars so small outside the US?
3. Ten Ways to Calm Car Traffic
4. How the Dutch got their Bicycle Paths