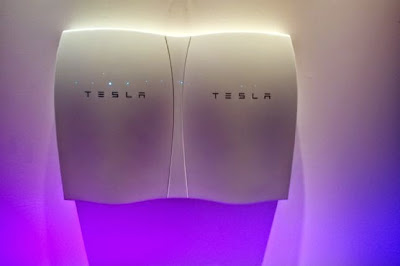 But if you have a dream that this battery will help you get off-grid, you'd be disappointed. For that you'd need the daily-cycle kind of Powerwall that would help you through the night when your rooftop PV system's output is nil. That would be the 7kWh Powerwall. But for now, Tesla is not selling that in the US, where it's cheaper to use the grid as your night-time backup.

The Powerwall available to US consumers now is the kind that provides you with occasional backup should the grid power go down. This Powerwall is not meant to be cycled daily. It stores 10kWh of energy, about the daily consumption of the average US household.

And I can see why the 10kWh is sell-out popular.

I live in a neighbourhood full of mature trees and above ground powerlines. This kind of electricity grid is vulnerable. Never mind extreme weather: when we sniffed a storm coming, CelloDad would pre-emptively turns off his computers. It's a crazy way to work. (He's got a backup power box now).

In a major storm, downed trees can cause power outage for days. The obvious solution is to upgrade the grid to the standards of the rest of the developed world. That involves putting the power lines underground: it's safer in many ways, and certainly less ugly. I've been told that kind of infrastructure change costs about $1million per mile, so the reality is that it's not coming to my neighbourhood anytime soon.

This is where that Powerwall comes in real handy. You could get backup power from a diesel generator, but it's noisy, smelly and potentially dangerous if you don't vent it properly. A silent system running on natural gas costs about $10,000 to install properly. A 10kWh Powerwall costs $3,500. It's silent, clean, and can be charged by your rooftop PV. And it looks the epitome of cool.

You may also like:
1. Boys with (Electric) Toys
2. The Diesel to Electric Transition
3. Charging networks: The EV chicken-and-egg problem has hatched several solutions