You might think a parking crater is a particularly large pothole in a parking lot. Or it could be a high-tech robotic device that puts you car in a box - a crate - and stores it neatly stacked among other cars.

But it's neither. According to Angie Schmitt of Streetsblog USA, who coined the term (so she would know), "a parking crater is a depression in the middle of an urban area formed by the absence of buildings" usually because there is a parking lot.

Because there are 3.5 parking spots for every car in the United States. 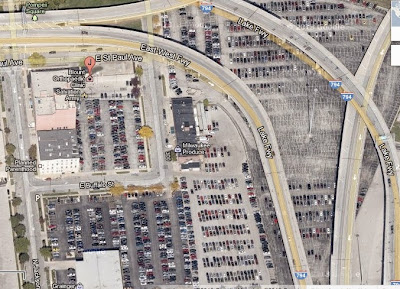 This is Milwaukee's parking crater

And all those parking spots must be somewhere. Especially in downtown areas, where people collect to work and play, and get there by car, there must be parking spots. So many cities are pockmarked by large areas that used to house blocks of fine old buildings. Those buildings have now been torn down to make place for vast expanses of asphalt, empty except for the white lines that mark out each parking spot.

Streetsblog USA, which advocates transitioning away from a car-centric view of city planning, has put up for a vote which US city has the worst parking crater. The areal photos look pretty bad - but the desolation becomes really clear when you're standing next to a parking crater at street level.


Parking Craters: Scourge of American Downtowns from STREETFILMS on Vimeo.

(The winner of the 2013 contest is Tulsa, OK; in 2014 it was Rochester, NY. And the winner of the Golden Crater is unknown at the time of this writing. Check out the 2015 contest here).

You may also like:
1. How much horsepower do you need?
2. Strategies for increased fuel efficiency
3. How the Dutch got their Bicycle Paths