I've written before on the importance of names. Names are so powerful, that when they are attached to powerful beings, you must use the names with great care. In fact, you're better off not using their name at all, lest you incur their terrible wrath.

So what to do, if a powerful Thing is about to wreak havoc on your constituents?

As any Harry Potter fan can tell you, the easiest way for a government to insist that an existential threat doesn't exist is to ban all mention of its existence. Thus in the magic world Voldemort is referred to as the "Dark Lord", or "He Who Must Not Be Named", or simply "You Know Who". Because of course everyone knows who is it you're talking about. 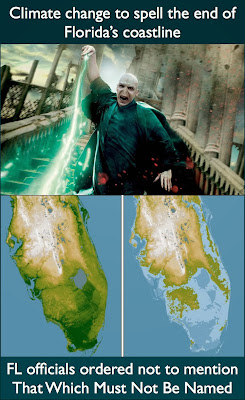 It seems that the state of Florida has adopted the same tack when faced with the existential threat of climate change, which is slated to wipe out most of its celebrated coastline: Officials in Florida's Department of Environmental Protection have been ordered not to use the terms "climate change" or "global warming" in official documents.

This is so that the booming real estate business in places like Miami beach can run its exuberant course. Before the sea moves in.

Because the kind of engineering wizardry that has built the Dutch coastal defences will be quite powerless to keep the rising sea out of Florida where the ground is porous. So the sea, like a Dementor, will seep in, permeating the southern tip of the state with a dank despair and prompting an evacuation of all land life, before eventually making it succumb.

You may also like:
1. The Power of Names
2. Enough People
3. Enough Hockey Sticks for TWO Teams