The good news: the average fuel economy of new cars and light trucks sold in the US has been increasing steadily, reaching 25.4 mpg in January 2015 after being stuck around 20mpg for two decades. That is good news for the climate, and shows that the CAFE rules, which require the average efficiency to reach 54.5 mpg by 2025, are effective. 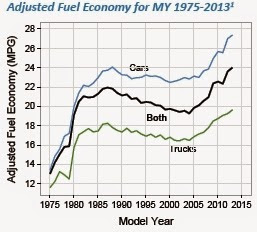 Part of the difference comes from the fact that fewer Europeans drive pickup trucks.

But the main reason is a relentless drive by European governments to increase the fuel efficiency of its fleets by unsubtle tax incentives. The Europeans have a colourful energy efficiency label that indicates, at a glance, the efficiency of the New Thing you are buying, whether that's a car, a washing machine or a refrigerator. And one is being designed to rate home's energy efficiency. 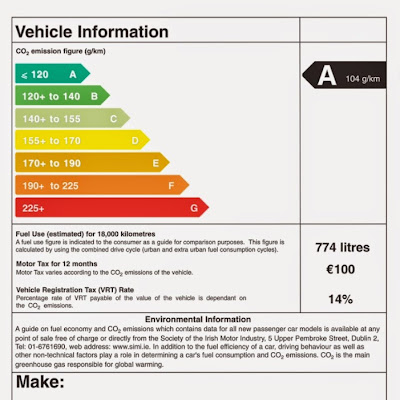 The average new European car of 2013, with its 127 g/km emission, falls in the "B" category. This year's average American new car, with its 25.4 mpg or 215 g/km, falls in the "F" category according to this classification scheme.

The US CAFE goal of 54.5 mpg or 100g/km would put the average new car of 2025 in the "A" category. Except that the classification scheme is continually being tightened as technology progresses: a car that was firmly in the "A" class five years ago may be classified "B" this year.

It must also be remembered that the 54.5mpg number is as defined according to an obsolete test cycle that tended to overstate the fuel efficiency rather significantly - but then, so does the current European test cycle. The current US EPA test cycle, which are quoted by car makers selling new cars, are much closer to reality.

I'm mentioning this because it's useful to see how you're doing compared to the rest of the world. These energy efficiency labels make that clear at a glance. And no translation is necessary: I mean, the number 100g/km is the same in any language. If these same labels were introduced worldwide, it might just spur the fleets still at "D" or "F" to play catch-up.

Because transparency always benefits the consumer.

You may also like:
1. Carbon Tax is an Effective Tool to Reduce Cars' Emissions
2. Why the new CAFE standard is just my cup of tea
3. mpg vs. REAL mpg