Carbon Tax is an Effective Tool to Reduce Cars' Emissions

We collectively need a drastic reduction of our CO2 emissions, especially from our cars, and as quickly as possible. This much is clear.

I have argued that an exclusive favouring of hybrid and electric vehicles makes no sense if other automotive technologies can also achieve emissions reduction (and I'm talking about real, lifecycle emissions, not just tailpipe emissions).

On the other hand, boosting funding for road maintenance by slapping a tax on hybrid and electric vehicles, as now proposed in several states, is a hare-brained scheme that gives precisely the wrong incentive. Assuming, that is, that we are serious about fighting climate change.

The most straightforward way to reduce cars' carbon emissions while simultaneously raising highway funds (and the most fair) is to impose a carbon tax, both on the buyer of gasoline, and the user of electricity. This way you will be taxed whether you drive a gasoline or electricity powered car. You will be taxed according to how much you drive - without the need for a tracking device. And you will be penalised for driving a gas/electricity guzzler, by bearing a higher per-mile cost, and rewarded for driving a sipper.

Currently, the Federal excise tax on gasoline is 18.4 cents per gallon; various state and local fuel taxes add on average another 30.4 cents per gallon, for a total of 48.8 cents per gallon. The Federal tax is unchanged since 1993, but the nation's fleet has become more fuel efficient, and 20 years' inflation has also taken its toll: no wonder the infrastructure budgets are suffering. 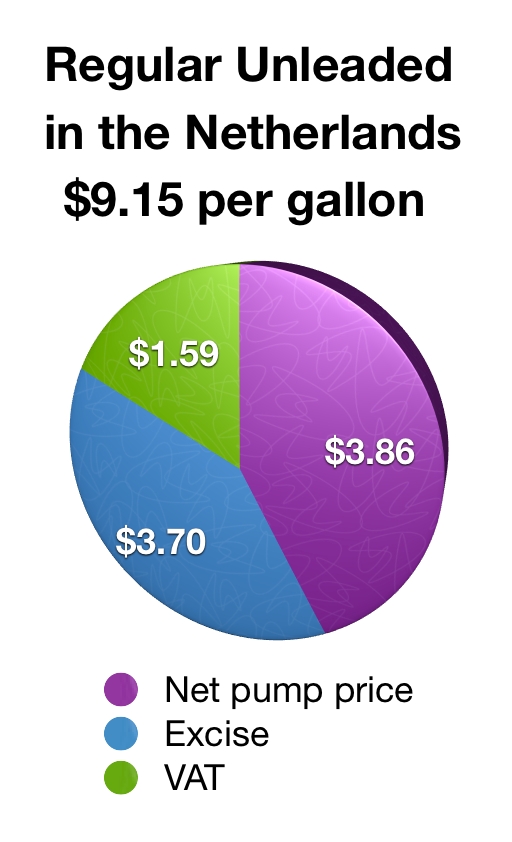 Simply raising the gasoline tax would go a long way toward shoring up the means for road maintenance. Impose a similar tax on the carbon emissions of power plants (charged to the end user), and you would have a fair and transparent system in which it is easy for users to make an apples to apples comparison, for instance in the choice between a hybrid SUV and a smaller car with conventional engine. I repeat: No tracking device required.

Obviously, if you manage to power your EV off your solar array or your water wheel, you deserve to use the roads without being taxed.

But why stop there? Why be content with simply leveling the playing field?

So what if that invokes the wrath of the electorate? How about the clout of the corporate interests who shell out all those campaign contributions? -- Guess what: Maybe it's too late to worry about stuff like that; right now, I'm afraid politicians will just have a grow a spine. Yes, a carbon tax is an added expense. So is a climate-change driven catastrophe: the bill for Superstorm Sandy alone is slated to exceed $ 60 billion. I call that a climate change tax.

If we are really serious about preventing the fiscal bleeding we will suffer from climate change, we would put a serious tilt on the field in favour of low emissions vehicles. There are plenty of examples of such tilts in the European tax codes, each an effective incentive to choose for gas sippers.

As a case study, let me focus on the Dutch automotive tax (since I can read the Dutch, and I'm too lazy to struggle through, say, the French tax code). They will vary a little across the European countries, but they all have the same gist: put a lid on CO2 emissions by using not-so-subtle carrots and sticks on the consumer. I should add they use rather small carrots, but wield very large carbon-tax sticks. But you can't argue with their success.

Dutch automotive taxes come broadly in three categories: taxes that you pay at purchase, vehicle taxes paid annually, and fuel taxes. Every one is designed to lower the use of fossil fuels.

If you consider that this carbon tax can rise beyond € 21,500 above 229 g CO2 /km (about 24 mpg), you realise why it makes car buyers deliriously happy to see it reduced to Zero, and why that's such a come-on for buying the sippiest cars.

And the carbon tax is about to be tightened: by 2015 it is waived only for vehicles with emissions less than 83 g CO2 /km. (All these numbers overstate the actual real-life fuel efficiency, but it's the trend that matters).

Of course, there's the 21% VAT charged on every purchase, calculated over the base price of the car. European MSRP numbers include both these taxes. In the US, the sales tax is 0-10%: so compared to the rest of the world, cars are cheap in the US!

Annual vehicle tax
The motor vehicle tax, motorijtuigenbelasting, depends on the province of residence. Most of this tax goes toward road maintenance, and since heavier cars give more wear on the roads, it's fair that the tax rises quickly with the weight of the car. For a Hummer of 6000 lbs the vehicle tax is over €2,000 every year.

You pay this tax whether or not you actually drive the car; however, it is waived for emissions less than 50 g CO2 /km (pushing for new technologies to be developed). The Dutch tax service offers a calculator for this tax; in practice, most people arrange for automatic annual or quarterly payments.

Fuel tax
Finally, there are taxes on the fuel that you need to actually go somewhere with your car: The purchase price at the pump includes a fuel excise tax (€0.75 per liter for 2013, or $3.71 per gallon), and of course there is the ubiquitous VAT at 21%.

You wonder that the Dutch, with their excellent public transport and their dense network of bicycle paths, buy cars at all. Certainly, all these taxes conspire to push the choice toward small, light, and fuel efficient cars. The choice is still there, for those who can afford it: an SUV is a real expression of conspicuous consumption. I have never seen a Hummer in the Netherlands.

The table below shows a few examples from the middle range of the Dutch spectrum; all amounts are in Euros. The annual vehicle tax is shown for the province of South Holland, which contains large cities such as Rotterdam and The Hague. The annual gasoline tax shown assumes a total 14,000 km or 8700 miles per year, the European average.

From the table you can see the Dutch government's use of small carrots and very large sticks in their drive to lower carbon emissions from the nation's fleet of cars. The Audi Q5 crossover, which starts at $ 35,900 in the US, sets you back € 57,870 in the Netherlands, or $ 75,500 (did I not say that cars are cheap in the US?). More than one fifth of that amount, over €12,000, can be attributed to the carbon tax because, at 24 mpg, the Q5 is a gas hog.

The Ford Mondeo (known as the Fusion in the US) has a better fuel efficiency (although far from stellar), and incurs a much smaller tax hit. But both the Mondeo and the Q5 are really quite large. Even a Prius has a hard time fitting into some Dutch parking spots.

The VW Golf, a middle-of-the-road sized car in the Netherlands, is hit with a vehicle sales tax of €2,375 (five times smaller than that for the Audi Q5), or about 10% of its total MSRP for this gas-frugal version.

Not surprisingly, this segment of the market is growing: Dutch roads are plied by a lot of citycars besides the Fiat 500, such as the Toyota Aygo, at €9,700 more affordable, and still able to get you from A to B without getting soaked in the persistent Dutch winter rains. If it's you and a mate, and possibly a cello, why not drive a Fiat 500? Why get clobbered tax-wise by driving a large car with a large carbon footprint?

Europeans do get something back for those taxes: their roads are uniformly excellent. I can't remember when I last saw a pothole there. My dad - who used to take us on 6-week road trips, roaming all over Europe - hasn't had a flat tire in 40 years.

Another side effect is that the latest and greatest in automotive technology is reserved for the very demanding European market. Often, innovative and money-saving technology is available in Europe years before it is for sale in the US, since our fuel efficiency requirements under the CAFE standard lags the European one by about eight years. Think of Volvo's turbodiesel plug-in hybrid, whose specs boast 124 mpg efficiency. You get what you ask for.

You may also like:
1. Why Discrimination is as Senseless for Cars as it is for Humans