Here's a dirty little secret of public transport: a lot of it runs on diesel. And while modern diesel engines are super-clean compared to what came before, if you have many of them working in close quarters like in a large city, the total pollution can still be a huge problem.

In fact, in 2014 London's mayor Boris Johnson finally had no choice but to admit that Oxford Street, which has a high density both of famous shops and of the iconic double decker buses, all diesel powered, also had one of the highest pollution levels in the world. So London is going to go with lower-emission buses: they are getting 2400 hybrids and 300 electric buses on the road by 2020. 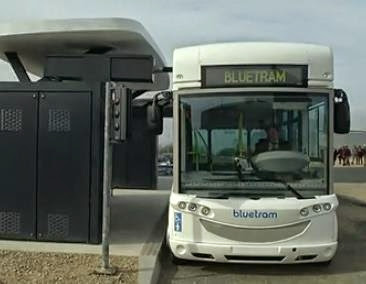 Paris is not waiting that long. In the spring of 2015, they are introducing the electric BlueTram. Strictly speaking, it's not a tram, more like trolleybuses. This means that they don't need to install the rail infrastructure which would be expensive, disruptive and prone to delays.

The buses are electric so they have zero tailpipe emissions: that's great for a crowded city like Paris. Most electric trolleybuses are powered by overhead electrical wiring. But that means additional time and money in building the infrastructure, and it's not pretty.

But what's the alternative? As EV owners know, you need to plan a chunk of time every day for charging the battery of your electric car. City buses run all day long; it would be silly (and expensive) to run only half the fleet while the other half is charging.

Enter the supercapacitor. This is the cool new thing about BlueTram's electric buses: They don't have chemical batteries like the ones in Teslas or Leafs. These buses have a bank of supercapacitors mounted under their roofs, where enough electricity can be stored to move them a few bus stops.

Supercapacitors are basically a pair of metal sheets close together (separated by either an insulator or an electrolyte). Pairs of metal sheets can be rolled up or layered to pack a lot of charge in a reasonable space. They can be charged very quickly and repeatedly. They don't have "memory" of the kind that makes your 12-hour laptop battery deliver only 15 minutes after a number of charging cycles. They have long lifetimes, and are much less sensitive to temperature swings than chemical batteries.

However, supercapacitors just can't hold that much charge compared to a Lithium-ion car battery. So that would lead to serious range anxiety for individual EV owners. 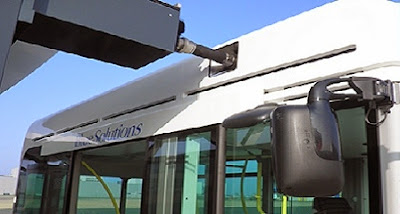 But they are perfect for city buses! City buses stop frequently, at bus stops. The BlueTram buses are designed so when they pull up to selected bus stops, an arm reaches out from the top of the bus and engages to the charging station embedded into the bus stop. The supercapacitors are recharged in about 20 seconds, a lot less time than it takes for passengers to get off and onto the bus. After that, the bus is good for another few stops, enough juice on board to reach the next bus stop with a charging station.

The ride is quiet, and nobody gets asthma from walking or biking on the same street, or even sharing the city air.

You may also like:
1. The Diesel to Electric Transition
2. What's so clean about diesel?
3. The Difference Between Owning a Car and Being Mobile