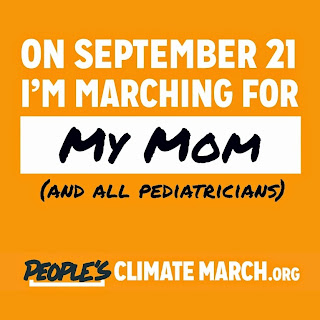 For a number of years, my mom worked as a pediatrician in a tropical country. She worked with a doctor who ran his practice more like a charity clinic, and at public hospitals. She never had a private practice, which would have been the more lucrative option. But that's not why she became a doctor.

For a time, she lived in a tiny village where the village women would sometimes bring their sick children to her veranda: my mom always helped their children, without asking for payment. The next day those moms would be back to thank her, bringing half a dozen eggs, or a basket of vegetables: whatever they could spare. And a child on the mend.

My mom was that most dangerous kind of woman: a woman who acted out of her own deep convictions. She had become a pediatrician to help out children, and that's what she did, no matter the circumstances. During a cholera outbreak, she was at the hospital twenty hours a day. Being six months pregnant didn't stop her (my brother came out allright, so she must have taken good enough precautions).

Contrary to the custom to prescribe antibiotics at the first cough, then popular with doctors who were encouraged and rewarded by pharmaceutical companies, my mom used antibiotics as the last resort it should be, and on her own predicted the rise of bacterial resistance which is today becoming a quiet crisis.

She went her own way, my mom: because she had a clear vision of how she could make a difference.

So I'm going to the Climate March, and I'm marching for my mom, and all pediatricians like her. These doctors will be at the forefront of climate consequences: because children are more vulnerable to all sorts of threats, from extreme weather, to diseases, to climate-change induced disasters.

This is really the ultimate in social injustice: the fact that our children get to bear the brunt of climate change produced by us and our parents back for generations. Because carbon dioxide hangs around in the atmosphere for a thousand years.

It's young children that are affected most by extreme heat and extreme cold, the kind that is happening more often now. It's children whose health is most threatened by deep drought or fast flooding. In warm places flooding can lead to outbreaks of malaria, dysentery and other communicable diseases which affect children much more strongly than adults.

Insect-borne diseases are now migrating towards cooler latitudes: there is dengue fever in Japan, West Nile virus in California, Lyme disease in North Dakota. Concerned parents are starting to keep their children indoors. But children need to play outside, and not getting enough of that can lead to depression, weight gain, and a host of other problems. Not to mention a disconnect with nature, which is exactly what we don't need right now.

So pediatricians, more than any other kind of doctor, will be dealing with the consequences of climate change in their young patients. I'm marching for them. Heaven help them: they're the ones who need to help out my children, your children, everybody's children, when climate change hits their lives. From what I can see, there can't be anything more harrowing to a doctor than to lose a young patient.

And my mom? In this case, I believe she wouldn't say "Are you sure you want to do this?" (her gentle code for "That's a stupid idea, girl"). She'd tell me to be careful; after all, I've never gone on a march before. But I think she'd approve.

Come march with me: Sign up at 350.org's Climate March website, or join the Moms' Clean Air Force.

You may also like:
1. How will you travel to the Climate March?
2. Slash your carbon footprint
3. Let's Talk with Our Children about Global Warming
4. Teach Your Parents Well: Children's Views on Climate Change