People's Climate March: of Community, Communication, and Things Which Must Not Be Named.

I've a confession to make: this is my very first march, ever. But even I could tell that this was going to be special, when I showed up at the train station at an ungodly hour, and the woman who got her ticket before me turned around, glanced at the sign that CelloPlayer had made, and said cheerfully, "Looks like we're headed for the same place", before disappearing to the platform. 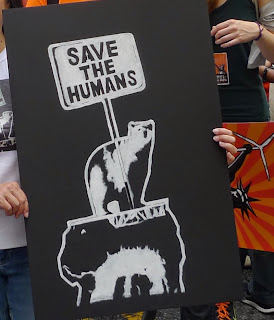 When I had made my way onto the same platform, I could see her sitting a bit further down. But I never got a chance to say hi to her because a gentleman came up to me and said something about my sign. I looked up, into kindly eyes framed by white hair - and a rainbow beard.

This gentleman, easily older than myself, looked like something out of Harry Potter. In fact, I'd say he handily beats Nymphadora Tonks for colour in the hair. I suppressed an urge to see if I could make his beard change colour by, say, upsetting him with an insult; he was too nice for that, anyway. Instead, we started talking about hair (well: beard) dyeing technique. Pretty soon, we had moved on to carbon emissions and cars' fuel efficiency.

I got on the train but didn't get much of a chance to marvel at this man's easy defiance of the dress code before another man shouted, "But why save the humans?" - making his travel companion giggle, even as she rolled her eyes at me in apology. I made a lame joke, but really I wanted to say, "Because humans include you. And you just talked to me out of the blue. That's cool. There's a few mighty cool things about us."

And so it went.

Emerging, finally, at New York's Penn Station, I decided to walk to the eatery where I was to meet some friends. 8th Avenue saw a steady stream of tourists, tour hustlers, and people carrying signs and wearing T shirts that said "People before Profit" and "Citizens Climate Lobby" and "Ban Fracking Now". The tourists checked us out. The hustlers had seen everything. The climate marchers struck up easy conversations with other marchers walking alongside, speculating about the size of the march, talking of other marches, of their climate activities. Inquiring basic things: where are you from; where are you going to join the lineup?

Passing a subway station on 7th Ave, a burly man in a blue "People's Climate March" T-shirt spontaneously started to give me directions how to reach the lineup (not through Central Park which was all barricaded), then sent me on my way with a smile and a thumbs-up at my Save the Humans sign.

I waited to meet my friends at the corner of 57th and 7th Ave, balancing my sign on one foot and people watching. Among the steady stream of people headed north, there were some who permitted themselves a quick glance at the sign, then strode on, studiously avoiding eye contact. And there were lots who looked at CelloPlayer's sign, looked at my T-shirt, on which I had printed Andy Lee Robinson's Arctic Death Spiral, and registered their recognition with a smile, a nod or a short remark.

They saw me, and they knew.

They knew who I was. They knew why I was in New York that day. They were there for the same reason. All of them: the dads holding their children's hands, the bands of chatting friends, the middle aged couples dressed sensibly in shorts, T shirts and walking shoes, the groups of students sporting their school logos, the union workers assembling around their marching band, the moms pushing expensive strollers and the ones wearing their baby in a sling. They knew me. And I knew them.

Personally, I'm a loner by character; and generally, we in the west lead pretty private lives. For 400,000 people to come out and start talking to each other like we've known each other all our lives, is nothing short of astonishing. All day long, I found myself participating in those conversations - even more, initiating a few. It just blows my mind.

And these were real conversations - not of the "Hey, howya doin', have a nice day" type. Yes, we exchanged personal bits, but mostly it was about the science and politics of climate change, its effects on our everyday lives, our hopes for our children and grandchildren. We were all teaching each other - because no matter how much you already know about climate change, there is always more to learn.

Here is the really amazing part: everyone I've talked to said that they knew people who would have loved to come but couldn't make it on that day. Meaning the 400,000 that did show up in New York, and the hundreds of thousands more at rallies all around the world, are only a small fraction of the people who feel similarly about the climate change issue.

And looking at the photos of all those marches, I find that they look similar. The signs are in English, French, Hungarian, but the look and the feel of those marches is one.

The chant about democracy should have said, 'This is what community looks like." Because in the end, it is the community of people, caring for our common home, that will have to bring about the necessary change.

In the Harry Potter books, the wizards are always trying to move unobtrusively in the "ordinary" world, but never quite succeeding. Climate Marchers were not exactly trying to be unobtrusive, and we succeeded marvellously in making our presense be known, to the world - and to each other.

In a sad twist on the Potter analogy, it is not the marchers who are afraid to name climate change as the defining issue of our times, it is a few government bodies in the business-as-usual mainstream. The Harper government has muzzled Canadian meteorologists, who now aren't allowed to mention climate change in their weather forecasts. The US House of Representatives has barred the Department of Homeland Security from spending money on assessing climate change (even as the department itself is preparing for climate change which it calls the major security threat).

So climate change has acquired Voldemort status: apparently, in some corners it is now That Which Must Not Be Named.

It must be said these governments are aided by mainstream news media. A few, but far from all, major newspapers have carried the Climate March story on their front page. The silence from some TV news shows has been deafening.

That won't stop us. We will go home, and spread the word. We will put away the signs and the T shirts and the costumes but that's not the end. We - and that includes those who were at the March in spirit - will teach, work on policy changes in our towns, have coffee with our friends who aren't awake yet to climate change, organise.

And in all that, we will recognise each other.

You may also like:
1. People's Climate March: so big, there was no end to it
2. Climate Action for Families