In a way, asphalt is a car's dream surface: Asphalt is smooth, minimising noise and a bumpy ride. Asphalt is cheap (although that is changing). Asphalt smells good, both in the laying and at the first rain fall on a hot day.

However: Asphalt requires huge infrastructure to install, and is easily attacked by freezing water, and dissolved by clay soils. Asphalt makes the road surface waterproof and contributes to runoff, keeping rain water from reaching aquifers. Asphalt has near-zero albedo and blacktop roads contribute significantly to the local warming of cities: in the summer, coming home from an asphalt-covered mall parking lot to a tree-lined neighbourhood means experiencing a 10-20F temperature drop. Think of the temperature consequences for the planet as a whole.

For asphalt is ubiquitous.

But it wasn't always that way. Roads were ubiquitous in the Roman empire, but for their paving Roman engineers used stone, which has many advantages over asphalt. For one thing, stone is nearly unmatched for longevity. The original paving of some of those roads have lasted for 2000 years, although the wagon-wheel ruts are clearly visible. Most Roman roads didn't have water drains: except in heavy rainstorms, water just seeped between the stones to reach the soil underneath.

After the Romans, road builders started to use smaller stones, or, where stone wasn't readily available, clay bricks baked to near-lithic hardness. North European clays apparently were especially good for making sturdy bricks, some of which have survived from the Middle Ages. These have their advantages. Drainage
Smaller stones work particularly well in those places that need better drainage, such as the rain-blessed Low Lands. This is perhaps why brick-sized stone pavers are still called Belgian block. The seams allow most rainwater to drain right through to the sandy substrate underneath; that means you can build reasonably large market squares without installing a drain every few feet.

Whatever water seeps into the ground contributes to replenishing the aquifer, and does not contribute to the flow into the storm drains, which drains into the nearest waterway, which drains into a larger waterway, and so on until (in most of the US, anyway) the flow finally becomes part of the Mississippi River which has recently acquired a disturbing habit of showing 100-year level floods every few years or so, which can partially be ascribed to the paving over of so much land area.

Smooth ride
Belgian block and street bricks have flat surfaces, so when laid properly the resulting road surface is reasonably smooth for rubber tires inflated to 30psi like most car tires are. It is also a pretty quiet ride, although not as quiet as asphalt. 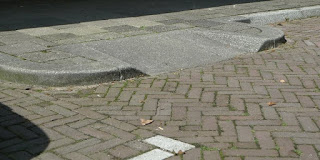 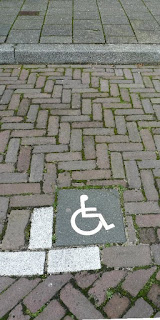 Street code
Bricks tend to give a bumpier ride to bikers whose tires are inflated to 60-70psi. So in the Netherlands, bike paths tend to be paved with larger concrete pavers. Sidewalks are paved with the same pavers, sometimes in different patterns to distinguish them from the bike paths. Both are a strong cue that these portions of the road are off limits to cars. For good measure, they tend to be rimmed with tire-eating curbs, interrupted only at those places where bikes can move from the road onto the bike path or sidewalk.

Even on the cars' portion of the road, different paving patterns are used to indicate various functions, such as turnoffs and parking spaces. White bricks are used for demarcation lines, between lanes, and between parking spaces. Special bricks can be used to designate handicapped parking. 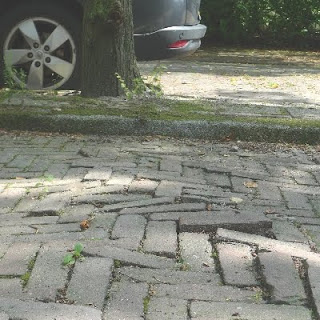 Low maintenance
The spaces between the bricks also act as expansion joints, so stone or brick paved roads are less sensitive to seasonal temperature variations than asphalt roads. And even road bricks have an impressive lifetime. Of course, road surfaces built on clay ground tend to shift and buckle with time. Young shade trees mature and their growing roots will cause an interesting topology centred on the tree trunk.

Four decades after it was first constructed, my parents' street was a veritable history of people's favourite parking spots, their favourite part of the road to drive on (the middle), and the growth of various trees at the edges.

No problem. The city arrived one day with a crew of workers, who lifted up all the bricks, laid down a fresh layer of sand, neatly graded, and re-used all the unbroken bricks, which were the vast majority, to re-lay a new street surface. The whole job was done in a few weeks, and required less than one pallet of new bricks (and maybe a box of white ones) to replace the broken ones. If you look at the re-used bricks you can see that they can stand up for a repeat of this procedure every forty years for a long, long time.

Stone-paved streets are strangers to that bane of the asphalt surface: potholes. If laid properly, the bricks hold each other in place. However, if the ground sinks in one localised spot, it is trivial to repair just that patch seamlessly: that would be impossible to do with asphalt which prefers curb-to-curb installation: It's like the difference between carpet tiles and wall-to-wall carpeting. Versatility
By the same token, it is quick and inexpensive to install a temporary road surface, or to modify it temporarily, such as when you need to re-route trolley tracks while road construction is going on. It's relatively painless to install a rail change element, and pave around it so traffic can still cross the rails, and moving back to the original configuration is equally straightforward.

Snow removal difficult
One of the few downsides about stone paving is that it is nearly impossible to use a snow plough on it, since that requires an asphalt-smooth surface to be effective. Every brick that stuck out just a little bit would be flipped out of its spot by the relentless front edge backed by the power of a bulldozer.

Then again, only the places closest to the poles are covered in snow in the winter. Places with more moderate climates don't need to take snow removal into account when planning for their city streets.

Tunable albedo
On the other hand, if you choose a lighter colour for the pavers, you can significantly increase the albedo, or the reflection of sunlight, from your road surface. That helps slow the warming of both the immediate neighbourhood and the planet, over the lifetime of the paver. This benefits especially cities and towns in temperate and tropical zones.

Cleaning
Stone paved streets used to be cleaned with brooms, but now that job is done by what amounts to giant vacuum cleaners on wheels, outfitted with brushes to get at the dirt in the corners. European streets are, not as clean as Japanese ones, but clean enough. By that I mean that in a forty years of logging the miles all over Europe, my dad hasn't suffered a single flat tire.

Of course, seams between pavers attract weeds. Even those are dealt with firmly, though no-one would dream of spraying them with weed killers. The street cleaners are simply fitted with a steel brush: no weed can stand up to that.

So with the increasing price of asphalt, towns and cities in warmer zones might just be inspired to consider pavers for their streets. Older towns in the US might already have them, hiding underneath a thin layer of asphalt. As the top asphalt layer starts to crumble, all you really have to do is to spread a layer of clay over it, wait a season or two for the clay to dissolve the asphalt (this process is surprisingly fast), and sweep it all away to expose the glorious original stone paving.

Then you can take away the No Skateboarding signs.