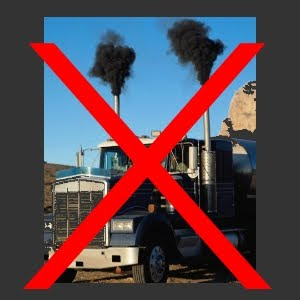 Say goodbye to the image of Mack trucks belching a large black cloud of exhaust wherever they go. With the arrival of ultra-low-sulphur ("clean") diesel at US pumps, and the development of power-boosting and exhaust-scrubbing technologies, diesel-powered passenger cars are cleaner than their gasoline counterparts on just about all emissions - and run at a higher fuel efficiency.

In the realm of the internal combustion engine, it's hard to beat a diesel engine for its simplicity: there is a piston (one of four, or six) that compresses air to 1/25th or so of its original volume. Compressing air like that raises the temperature (just think of how your bicycle pump heats up with vigorous use). If you inject diesel fuel at the top of the piston stroke, the high temperature is enough to cause it to ignite. No sparkplugs required.

That combustion forces the piston out to its extended position. After that the piston comes back to eject the resulting exhaust, extends again to take in air, and and the cycle resumes. The piston is connected to a crankshaft, which translates the back-and-forth motion to a rotational motion that your round wheels can understand.

Diesel engines are strong, and have long lifetimes. Until recently they have been used mostly for very large things, like Mack trucks that need to haul serious loads, or even heavier trains.

Diesel's problems: they are hard to start, and once they get going they are loud, and throbbing, and then there's that black smelly cloud that they tend to belch. While I have always wanted to drive a trailer truck across a continent (almost any continent will do, I'm not picky), I wouldn't want to have a brute of an engine like that on my driveway.

So why does this blog drool so persistently over diesel-powered cars?

Because what's under the hood of a diesel-powered passenger car in the 21st century is a far cry from the monsters that my dad used to wrestle. (Literally. He used to say, snuffing my trucking dreams, that I didn't have the upper body strength to make a truck go around the corner. He was right back then, but driving a diesel car now is no longer a wrestling match, thanks to power steering). Also, the fuel itself has become cleaner.

"Clean" diesel.
Wait: Isn't diesel what's left of petroleum after you take out the gasoline, the kerosene, and the stuff from which shampoo, fertilisers, and all manner of plastics are made? How can the rest possibly be "clean"?

It's still diesel. It still contains benzene, toluene and other organic compounds that aren't good for you. But when most of the sulphur has been taken out, to a level of 15ppm or lower, you can call it "Ultra-low-sulphur diesel" or ULSD for short. And because nobody can remember the acronym, or might confuse it with either a university or a psycho-active drug (and because it sounds so green), it's known as "clean" diesel.

It is actually cleaner than what came before, particularly if you consider that the previous diesel standard allowed for 500ppm of sulphur. At that concentration the sulphur tended to give much higher levels of particulate matter pollution. It also poisoned nitrogen oxide catalysts that were trying to keep smog formation down. Think about it: since the introduction of "clean" diesel in 2007 you don't often see trucks surrounded by a dark cloud of exhaust any more.

Turbocharged.
That diesel exhaust cloud was black because it was full of soot: mostly carbon that didn't get burnt in the engine. I bet if you could collect those soot particles and compress them into a long thin cylinder you could make a nice pencil.

This is because a piston by itself is not all that good at air intake: at the expansion stage the pressure inside the piston is lower than that of the outside air, and there is simply not enough air to completely burn the fuel injected into the piston.

A turbocharger installed in the air intake presents the piston with air that's pre-compressed to nearly twice atmospheric pressure. That means that you can burn just about all the fuel injected, eliminating nearly all soot in the exhaust. Moreover, the piston stroke is more powerful, boosting the fuel efficiency. A further benefit is the huge reduction of organic hydrocarbons, some better known as volatile organic compounds, or VOCs, that have been implicated in several serious health issues.

Turbochargers, originally developed for airplane engines that had a hard time at high altitudes where air is thin, have come a long way. They are now much more robustly built than their forebears.

Not only that, they get their power from the engine's exhaust gas, so they really pack a large increase in total engine power for very little extra weight. Or rather, they give a significant boost to the fuel efficiency for a given engine power.

Soot filters.
Any soot particles that are still left in the exhaust stream are caught in a particulate trap, and burnt off periodically to regenerate the filter.

Between turbocharging at the front end of the engine, and soot filtering at the back end, the particulate matter emerging from a diesel car's exhaust is lower than that of a gasoline-driven car of similar power. This is particularly true in an aggressive driving style where gasoline engines burn much less efficiently and emit a high level of particulate matter.

As an example, let's look at the Audi A4 Quattro, available in the US with a 3.0L TFSI (turbo fuel stratified injection) engine running on super unleaded gasoline and putting out 269 hp power. The diesel version with comparable power would be the 3.0L TDI (turbocharged direct injection) with 243 hp power, 10% less than the TFSI engine.

Both engines are turbocharged. But the diesel engine gets 50% higher fuel efficiency, 33mpg. This is thanks to the higher energy content of the fuel (15% higher in diesel than in gasoline), as well as the higher compression ratio of the pistons. The resulting lower carbon dioxide emissions earn it a European "B" label whereas the gasoline engine is only good for a "D".

The table shows the German pricing (in the US, the 3.0L TFSI starts at $ 47,300; the 3.0L TDI is not available here). In Germany, as in the US, the net price of the diesel is higher than that of the gasoline version of the A4, but the structure of the German car sales tax encourages the purchase of the version with lower CO2 emission, so the total price, shown in the table, ends up being lower for the diesel.

Audi A4 Quattro, gas vs. diesel.

I wasn't able to find emissions data for the 2012 models, so the lower half of the table shows data for 2011 models with comparable power, close to 250 hp. UK government data in the table is listed at car-emissions.com.

On most emissions standards, the diesel is actually cleaner than the gasoline version. The only exception is for NOx emissions, which contributes to smog, acid rain and respiratory problems, and which is more than four times higher for the diesel. The hopeful spin on this is that just a decade ago diesel engines, when compared to gasoline engines of similar power, had ten times as much NOx in their exhaust: so there is improvement.

But how does the drive feel?
Last summer in England we ended up driving a diesel rental, a BMW 118d M sport 5-door hatchback. We cursed just about every time we got in, and it wasn't because the steering wheel was on the other side. The seats felt wrong. The dashboard had the wrong curvature even for my short legs. There were large blind spots. CelloDad couldn't get in an out of that car without taking out a piece of skin or a button off the dashboard or something. The trunk looked okay but was full of useless nooks and crannies, so the storage was inefficient. There's no way a cello would fit there.

But the engine! Allright, so it's a BMW engine. To be precise, it was a 2.0L, 143 hp turbodiesel job. It might as well have been a regular gasoline engine. You couldn't hear the difference. You coudn't smell the difference. You couldn't feel the difference (it did throb, but it was a discreet kind of throb). In short, in no way did this car behave like a Mack truck. Especially once you take it on the motorway, where the hum was a pleasure. Anywhere really, it was hard to keep it from zipping around, even with the shift stick in my left hand.

Best of all? We stopped at the pump only once, at the end of a two-week trip. It had done 44 mpg.

You may also like:
1. Have your Cake and Drive it Too: of Fuel Economy, Performance, and Moms
2. Just how bad is diesel exhaust?