Mitsubishi Colt: Larger outside the US, for a change

It's getting to be a bit boring to keep writing about cars that, when sold in the US, are either physically larger than overseas versions of the same model, or come with larger engines requiring more gas per mile. For relief, here is one that bucks the trend: the Mitsubishi Colt.

When I was a student, I bought a used 1981 Plymouth Champ (also known as the Dodge Colt), which was a rebadged second-generation Mitsubishi Mirage. When you peeked under the hood, there were stickers with Japanese print everywhere. This was the one with a double shift stick, very much like the two gear shifters on a 21-speed bicycle: one covered four speeds, the other could be toggled between "power" and "economy" modes. Fast forward to the summer of 2011, when my dad bought himself a Mitsubishi Colt, in the Netherlands. This was a seventh-generation Colt, and completely re-designed. Since 2002 you could call the Mitsubishi Colt a mini-MPV on the small end of the range. It is a touch longer than my 1981 Champ: 3.885m (153in), but quite a bit taller at 1.55m (61in). The 1.3L ClearTec engine does a real-life 43mpg.

At age 84, my dad appreciates the higher seating in the new Colt, which means that he doesn't have to hoist himself out of the car after parking it. Nor does he have to climb to get in. He had to wait two months for this car, since he wanted automatic transmission (still non-standard in Europe; no pun intended). That also meant that he got the exact trim he wanted: the car was built to his specifications in the NedCar factory in the south of the Netherlands, a state-of-the-art facility that currently faces an uncertain future.

We went on a tour inside NedCar last summer: it was an impressive place. I had never been inside a car factory, and had no idea that "the assembly line" hasn't looked like Charlie Chaplin's Modern Times for decades. No two adjacent cars on that line were the same colour. Parts were transported in by an immense computer-controlled conveyor system, as required by each individual car's spec sheet. In fact, many of those cars were built to the customer's spec. Every fifth or sixth car got its steering wheel installed on the right-hand side: those were the ones destined for the UK market. It looked like a lot of fun to work there. 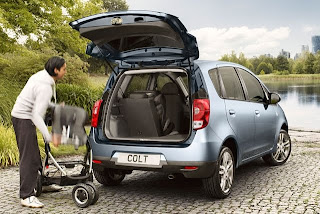 One of the features that won over my dad was the threshold-less cargo space in the back: this makes it easy for him to put in his rolling walking aid, and to retrieve it without having to lift it. Neither the Honda Jazz nor the VW Polo, which were on his short list (the same length but less height than the Colt) have that feature. 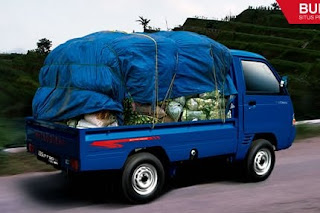 The other feature that appealed to my dad was, irrationally, the Colt's name. My dad knows the Mitsubishi Colt as the workhorse of Indonesia. Never mind that those run on a completely different Mitsubishi engine. Even the rebadged versions, made locally, still ran on that Colt engine, which has a reputation of never giving up. It is used for the microbuses used in semi-public transport all over Indonesia, and in pickup trucks cheerfully tooling along, with their loads of vegetables and chickens, or soil, or bales of textiles, or an impossible number of people, persisting under the most demanding circumstances: dusty roads, unpaved roads, overloads, unforgiving tropical climate. These vehicles are lovingly patched, repaired, re-painted, re-conditioned, whatever it takes to keep them going. And they are quite a bit larger than my dad's new car, although at 4.32m (170in) length (for the microbus) still small when compared to minivans or pickup trucks sold in the US.

In the consumer car category, the next-generation Mitsubishi Colt has been unveiled at this year's Tokyo Motor Show. It looks like a tiny version of a crossover SUV, measuring just 3.71m (146in) long,1.665m (66in) wide and 1.49m (59in) high. Its 3-cylinder, 1.0L engine with Auto-Stop&Go is said to get 3.3L/100km, or 71mpg. One should take that fuel economy number with a grain of salt, but probably 55-60mpg is a reasonable estimate of the real-life fuel efficiency, which means that the per-mile CO2 emissions of this car could be within 25% of that of the electric Mitsubishi i-MIEV when the latter is driven by the average US owner.

I can't wait to meet this new car. I could look over its roof, just like with that Plymouth Champ from my student days. And, like that car, apparently the new "global compact" is to be called the Mitsubishi Mirage.

What goes around comes around.