CelloPlayer is very fortunate to be in the classroom of Mr. S., an outstanding teacher who is loved by both students and parents. When told that our state is known for its good schools, CelloPlayer, with quiet authority, said, "Well yeah: it's because of Mr. S." Unbeknownst to his students, he is also a car afficionado who can tell you the latest tidbits about most any car.

One day, CelloMom found Mrs. S., also a fabulous teacher, with whom our eldest graduated, putting her groceries into their car, a Toyota Matrix. "CelloMom!" she said. We got to talking and CelloMom asked if it was allowed to take a peek into the car, to see if a cello would fit in the cargo space. "Why don't you take it for a spin?" she offered. 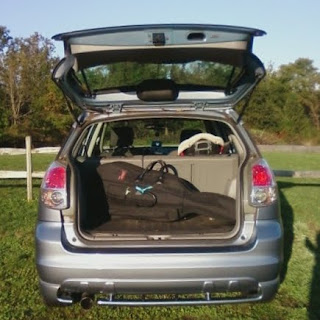 So, just a few days later, CelloMom found herself behind the wheel of that Matrix, while Mr. S. had the keys to our Golf and put her through her paces. The two cars are similar in width, but the body of the Matrix is longer by 24cm, or nearly 10 inches. That makes all the difference for the cello: where in the trunk of the Golf it has to be stowed on the body diagonal, it fits comfortably in the back of the Matrix, with plenty of room for growth for when its player needs a full sized cello.

The Matrix is based on the popular Toyota Corolla which, like many other cars in the US, has grown wider and longer over the years. But the Matrix has grown mostly in height: while not the full height of an SUV, its seats are higher than in a Corolla, easy to get into without climbing up or sinking down, and affording a better view of the road.

Mr. S. likes the fun instrument panel, and finds that with its front wheel drive it's very good to handle in the snow. Really the only complaint is that the raised back (and therefore smaller rear window) makes it difficult to see where you're going when backing up, or parking.

This car is pretty zippy: putting your foot down, especially from a standstill, makes it jump forward, meaning that its 132 horsepower, 1.8L engine is probably well oversized for its weight. It's built more lightly than a comparably-sized car of German extraction like an Opel Zafira, where you really have to haul at the doors to close them. 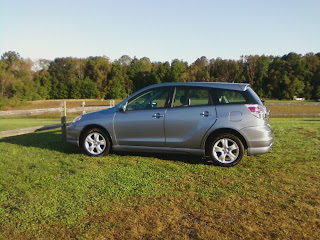 2007 Toyota Matrix XR
The extra height of the Matrix makes it easier to help children in and out of the car, especially for parents as tall as Mr. S. This Matrix, which they've had since their youngest was a baby, is the 1.8L XR version from 2007. Unfortunately, in the 2008 design change the car lost its third side window. When Mr. S. took a test drive in a new Matrix with his children, they declared that they felt like they were sitting inside a cave, and much preferred their own car. What is it with automakers' determination to take light and air away from the children on the back seat?

2012 Toyota Verso
The Matrix is a US-only offering by Toyota; not even its body is available in Japan or Europe. The closest relative is the Toyota Verso, just a touch larger than the Matrix in all directions, and (best of all) available in a 7-seat option, where both the second and third rows of seats can be folded down to give a completely flat cargo space for large items. So it's "Verso" for versatility. But I suppose that when the grandparents come along the cello will have to go on someone's lap.

Toyota Verso interior
One of the options for the Verso is a 1.6L gasoline engine that gets a quoted 35mpg which is corroborated by real life users. And since Europeans are less worried about rollover issues they can afford to put a huge window in the roof - nice for those more northerly places with only a little sun!