These three city cars may be small, but they are very brave! Fun little workhorses (workponies?), they will carry four passengers (sans cello) and perhaps two or three large grocery bags in the back, all for a reported real-life 46mpg.

A collaboration between Toyota and PSA Peugeot Citroën in 2005 resulted in a platform for a city car that each manufacturer has subsequently packaged to fit with the rest of its offerings: the Toyota Aygo, the Citroën C1 and the Peugeot 107. 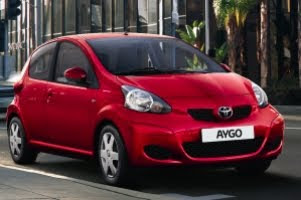 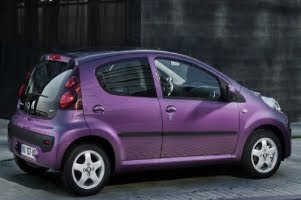 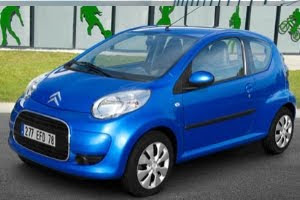 The Toyota Aygo (top photos; not for sale in Japan) has a more curvy body, a slight protrusion on the centre of the hood, and a very distinctive set of three rear lights. The C1 (bottom right) has a cleaner-lined, bullet look; the 107 (bottom left) has its own Peugeot flavour. On the five-door models, the rear doors go all the way to the back, meaning that there is really no metal at the rear corners (meaning they will probably have a hard time entering the US).

All three have a glass-only hatch. So far, I've heard or seen no complaints about leaks on the rear hatch, so that must be working out. In general, the three mouseketeers have an excellent record for requiring little repair.

All three cars are powered by the firing of three -- not exactly muskets, but small enough cylinders, inline, with a total volume of just under 1.0L. It is a testament to the development of the internal combustion engine that such an odd-cylindered, tiny engine is still good for 68 HP, more than enough to negotiate all but the very steepest of city streets with verve and style.

For they come in a few colours you don't see in the US, including a "Botticelli blue" for the C1, and that to-die-for metallic lilac on the Peugeot 107. Although I could do without the pink flower graphic (I mean, on the tachometer? and on the floor mat? A bit much).

They are not large. They don't even pretend to carry an optional fifth passenger: there really are only two sets of seat belts in the back. But I sat in a C1, and felt comfortable, and far from claustrophobic; this is because of the large windows and the mostly upright sidewalls that don't lean in on your shoulders. 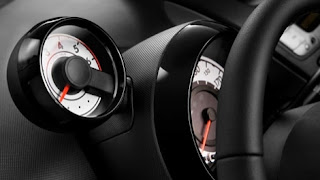 The dashboard is clean-lined and uncluttered. One might say sparse. Bells and whistles are strictly optional here - but options do include a GPS and air conditioning. Very optional is a tachometer which is tacked on to the large round speedometer, and ends up looking like an oversized lollipop.

A cello would have to go on the back seat, where it will just fit - just. You might need to angle it a bit. So these cars wouldn't work for CelloMom on any continent. But if you are a young cellist and you need to move from home to study to concert without getting your cello sodden or frozen, you could do much worse than a car like these.

With a top speed of 98mph they are highway worthy, and I've seen plenty of them darting around heart-stoppingly, dodging the tonnage of trucks and larger BMWs - since they are mostly steered by the young and impatient. Larger than the Fiat 500 "road lice" from the 70s, this batch of city cars remind one more of mosquitoes. There is no doubt that they are agile: just watch the hilarious Aygo football match put up by the zany guys at Top Gear. Oh, that's soccer.

A Tale of Three City Cars.