Turns out Americans ARE worried about global warming consequences - they just don't realise it.

The Pew Research Center has done a survey on what policy issues Americans think deserve top priority for the federal government. Respondents were asked to select one or more of 23 issues. 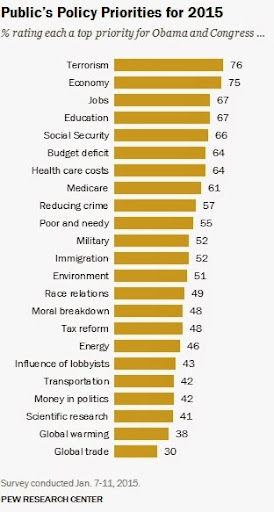 It is notable that 38% view global warming as a top priority, up from 29% only a year ago. The increase is indeed good news. But these numbers may be misleading (what is is they say about "lies, damned lies, and statistics"?)

Global warming has implications for a surprising number of the policy issues covered by the survey.

Clearly, our transportation, which is currently dominated by vehicles and vessels running on fossil fuels, contributes mightily to global warming - to be precise, 28% of total US emissions in 2012.

It is becoming more apparent that money in politics and the influence of lobbyists are key issues that need to be addressed if meaningful progress is to be made on fighting climate change. Because what is required is nothing less than a complete overhaul of our energy system toward low-carbon sources.

I am not going to guess at what people may have in mind with "moral breakdown". But it is clear that climate change will disproportionately affect the poor and the needy, and because there are racial correlations in the demographics, that will have bearing on race relations.

If you think economic immigration is a problem, wait till we get to deal with climate refugees. And race relations will play a role there, as well.

The military is readying itself to face the consequences of climate change. Crime is expected to increase in a hotter world.

As the number of days over 90F skyrocket and heatwaves become the norm rather than the exception, health issues are set to become a pervasive and expensive problem, both from the heat itself and from the migration of disease carrying pests. That has impacts on health care costs and medicare.

As for the budget deficit and the economy: Hurricane Sandy alone has a price tag of $60bn. The extreme and persistent drought in the Southwest is a continuing blow to the region's agriculture. Wild weather everywhere is inflicting economic damage.

Speaking of damage: it is well known to the world that Americans are, and have been for a long time, profligate users of energy and that we have contributed disproportionately to global warming. Desperation can lead to violence and even war, as it has in Syria where a large population was displaced by a persistent drought. I don't like to dwell on this, and sincerely hope it will not come to that, but I would not be surprised if at some point a retaliatory terrorist act was directed at the United States. 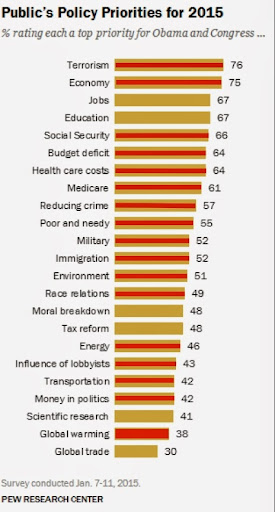 So the issue of global warming "bleeds" into a majority of issues that are very important to the American public (red bars in the graphic, above).

In other words, if you are so worried about these issues that you'd put them high on the national priority list, you really need to be highly concerned about global warming as well.

The fact that not everyone grasps the connection between even the environment (a priority for 51%) and global warming (a priority for 38%) means that climate communicators need to spell out more clearly the implications that climate change has on our natural infrastructure and our personal, everyday lives, and the things we, John and Jane Doe on the street, care about.

Speaking of climate communication: while there is a large opinion gap on environment and global warming which falls along party lines, a majority of Republicans put a high priority on, among other things, terrorism defense, reducing the budget deficit, strengthening defence, reducing health care costs and dealing with immigration. Climate communicators would do well to point out how dealing with global warming is aligned with these goals. It will take all of us to deal with this, so everyone of us needs to get on board, and clearly see the urgency.