Did a double take on the street. There was this good-looking car parked across the street - as in, not "vanilla" - and it was labeled Honda Civic!

Here. This is what Americans think of when you say "Honda Civic". Right? 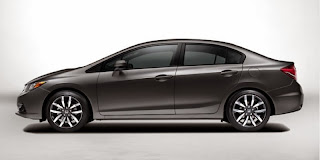 It's about as conventional, un-offensive, unremarkable as you can get. If you were to rob a bank, you'd choose a US Civic for the getaway car. For its ability to get lost in the crowd. 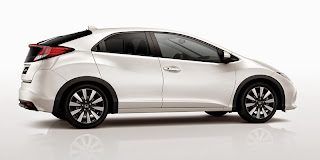 Actually, I saw it from the back first, and thought it was an Insight. But the label clearly said "Civic". Wow. I mean, I'm usually not very sensitive to how cars look, but even I can see that the European Civic is not suitable as a getaway car. It's a sweet thing.

Under its hood it's even sweeter. Unlike the US Honda Civic, you actually have choice about what goes there. Four choices ("petrol" means gasoline):

The fuel efficiency are real-life numbers as reported by drivers in the UK. They get only 30 mpg out of the 1.8L gasoline engine with automatic transmission (just about the only version you can buy in the US). That's why it gets the "F" emissions classification. Americans get 34 mpg out of this car. Which perhaps shows that Brits are more prone to drive their car like it's a getaway car. And that Americans can probably get better mileage out of the other versions as well.

Anyway, if you like the Civic but your family needs more space than the sedan offers, there is the wagon version, in Europe called the Civic Tourer. A sleek beast, with plenty of space inside. 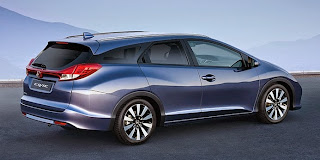 You wouldn't look like a soccer mom in this thing. In fact, you'd turn heads. So it would be totally unsuitable for robbing a bank.