The storm that has hit the northwestern coasts of Europe today is starting to be known in the Netherlands as St. Nicholas Storm, or sinterklaasstorm (like the Germans, the Dutch also love to string their words together. Back when telegrams were priced by the word, it was cheaper that way).

The KNMI, the Dutch equivalent of NOAA, has called code red, which means you should stay indoors unless you have real business outside. On the coast, winds up to 11 Beaufort are expected, pretty high even in wind-blown Holland. Some flights have been cancelled. Train traffic has been stopped in the northern half of the country. There are reports of cargo trucks being blown over.

This is terrible news for Dutch children, who are eagerly awaiting a visit from St. Nicholas, their patron saint who, as legend has it, makes it to the Low Lands by steam boat, and tours the country's roofs on his white horse on the eve of his saint's day to distribute sweets and oranges from Spain. 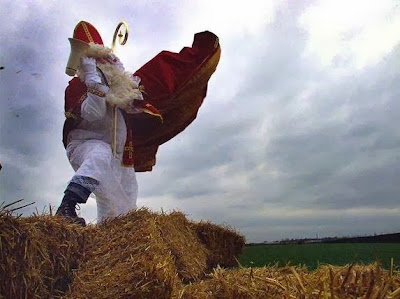 Let me put this in perspective: this is nowhere near Haiyan, the typhoon that wreaked such immense devastation in the Phillipines. This is just a storm, it doesn't even have an official name.

Still, the fact that the storm arrives together with a springtide causes many anxious eyes to look at the nation's coastline.

The springtide driven flood of 1953, which cost nearly 2000 lives and inundated half a province is alive in the nation's memory. Half the country is below the current sea level, and the rest of the place is not much higher; it's telling that the Dutch media tend to quote the highest likely sea level rise associated with global warming, rather than the possible range.

The previous time winds went up to 11 Bft was only a few weeks ago, on 28 October. But there was no springtide then. Still, this should give pause to a country whose very history has been shaped by its ambivalent relationship with the seas.

Floods feature very prominently in their list of disasters, there is a litany of them stretching back to the middle ages when storms were named after the saints on whose day they hit the land, like the catastrophic St. Felix Flood of 1530, in which up to 100,000 people died and an entire chunk of land, now called the Drowned Land of Zuid-Beveland, was lost to the waters.

Another devastating one was the Sta. Lucia Flood of 1287, which cost 50,000 - 80,000 lives, separated West-Friesland from Friesland and formed the deep marine intrusion that made the country look like a horseshoe until the twentieth century when a steady progression of poldering reclaimed the land area.

Given this history, it's no surprise that the Dutch are pouring nearly two billion euros a year into shoring up their dunes and dikes: their first line of defence against the power of the sea. (In a case of serious disconnect, they are also exploring for shale gas).

The Dutch might be allright for a while, but you can't say the same of the people of the Philippines, who now face the terrible aftermath of Typhoon Haiyan. Nor of Somalians, who in that same week were hit by a powerful cyclone. You shudder to think of what might happen if a typhoon should hit low-lying and densely populated Bangladesh.

A resident of beautiful (and low-lying) Kiribati has applied for climate refugee status in New Zealand, but his application has been rejected by immigration authorities, and now also by New Zealand's High Court.

It is quite possible that that decision was driven by a reluctance to set a precedent. Because it's only a matter of time before the world will see many more climate refugees. Since the industrialised west has so far shown itself to be unwilling to stand up to the moral challenge of effecting social justice, I suspect this issue will eventually reach the International Court of Justice, which is in The Hague. Let's hope it will still be above water by then.