Science on a T-shirt

My favourite hashtag this week is #scishirt. People post selfies of their science-themed T shirts. Some have institution's logos, often re-worked to get some effect. Some are funny. Some make you think, Oh God that's way over my head. But it's great to see how scientists are into their science.

Here's one for justifying slacking in the lab:

And #SciShirt is not just for in the lab:

Here is a cool astronomer #SciShirt:

This is one of my favourite finds this week! Rather than "back-of-the-envelope", this derivation is "front-of-the T-shirt"!

Second #scishirt featuring a shirt that illustrates the derivation of Shröedinger's equation in the shape of a cat. pic.twitter.com/BuD1PaLNao


Which is even better than this one:

And I will add my own, a long-time favourite. The Maxwell equations describe the electromagnetic waves which make up light. Geeky? - you bet! You can tell it's me, because I'm about to saw - I mean practice - on my cello. This is actually the second version of this T-shirt for me: I bought the first one several decades ago. That one was bright yellow with blue letters. I wore it until it had so many holes it wasn't really decent any more. But last spring I found this one! 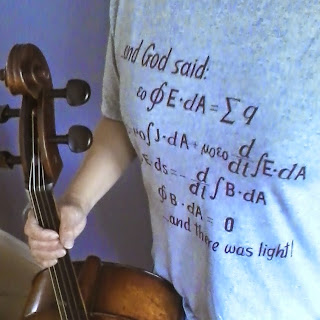 Go on: check out #SciShirt. You won't be sorry.

You may also like:
1. Climate Pickup Lines
2. Of Electric Vehicles and the Intergluteal Cleft
3. How to Drive on the Wrong Side of the Road (and Live to Tell the Tale)