Of Electric Vehicles and the Intergluteal Cleft

In case you were wondering, the intergluteal cleft is popularly known as the "butt crack": that which becomes visible when you wear low-hung jeans and do anything but stand up straight.

Such jeans are also known as "plumbers' pants" not because plumbers are excessively fond of them compared to those of other professions, but because when they work under your sink they display the defining property of these sagging pants.

Urban legend has it that wearing sagging pants originated in the US prison system, and were popularised by hip-hop artists in the 1990s, who turned the sagging pants into a fashion must-have. At first, really not that many people wore their pants that way. But now sagging pants have spread into the mainstream to the point that jeans for women are "low-rise" by default and you have to work hard to find a pair of jeans that hug your hips instead of miraculously hanging off them, seemingly defying gravity.

So now you know. But not to worry, this is a serious post. Electric cars are not to be the butt of any jokes cracked by me.

Electric cars, in fact, are very serious business. Over the past few years their sales have soared, and the discussion has finally shifted from range anxiety to the installation of charging points in this and that city.

But so far, and despite some price cuts, EVs have remained expensive. So it's not surprising that it is particularly the well-to-do who tend to buy them. In a survey published by the Wall Street Journal it was found that the 1% were over-represented in EV purchases during 2012: Among buyers of Leafs and Volts, over 30% had annual household incomes over $200,000, and nearly 4 of 5 had household incomes over $100,000. 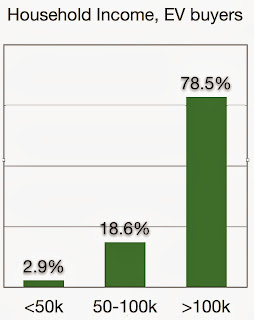 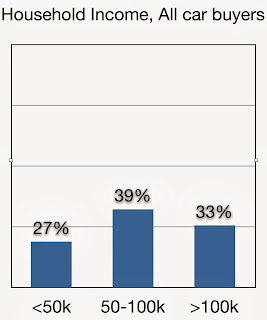 But, as with the sagging pants, the skewed distribution for EV ownership can't last. It must dissolve into a much flatter distribution, and it will eventually look pretty flat also, as EVs continue to penetrate the market. The very fact that it is still generally perceived as a rich man's toy contributes to the appeal of electric cars. (The survey shows results only for Leafs and Volts. If Teslas had been included the distribution would have been even more skewed toward high-income households).

Practical appeal is added by financial incentives and such privileges as the use of HOV lanes and special parking spots with chargers. California has spearheaded the installation of such incentives, which is probably why two cities, San Francisco and Los Angeles, account for more than 35% of EVs covered in the survey. But as it usually goes with these things, soon the nation will follow where California leads the way.

And the price of EVs will come down further (especially if it's helped by a judiciously placed carbon tax, that is heavier for larger polluters). I remember when a floppy disk with a storage capacity of 128kilobytes (kilobytes!) cost around $100 and a personal computer was for the eccentric super-rich.

From the perspective of climate change readiness, it's almost too good to pass up. Because exponential growth is also occurring in wind and solar energy. Even IKEA is starting to sell solar panels. There is the growing source of clean energy to feed the growing number of EVs.

Conversely, the batteries in the cars themselves are just asking to be used as the storage device that is required by wind and solar energy, which fluctuates with weather and the daily rhythm. If the generation of energy is distributed over farmers' land and residents' roofs, why should the storage not be distributed? Given the right kind of smart metering, and the right financial incentive, EVs and renewable energy can rise together. We'll need it.