[NOTE added 27 February 2014: There is NO scientific evidence that a positive feedback has kicked in. While methane levels are high (and increasing), they would have to be much, much higher to trigger "runaway global warming". Scott Johnson de-bunks the claims of a "methane emergency" (and the subsequent extinction of the human race by 2035) in this well-argued post].

A while ago, I looked into cars that run on compressed natural gas. Natural gas is cheap. It has been touted as a "clean" source of energy - anyway cleaner than coal. The burning of natural gas does not release soot particles that post a health problem; in addition, generating energy from natural gas releases less carbon dioxide, a greenhouse gas that causes global warming.

At least, that's the argument given by proponents of hydraulic fracturing, or "fracking" of gas-containing shale. But methane (CH4), the main component of natural gas, is itself a greenhouse gas, and one that is much more potent than carbon dioxide. Its global warming potential is usually quoted as GWP=25.

What that means is that methane is 25 times more effective at trapping heat than carbon dioxide, over a period of 100 years after its release into the atmosphere: GWP(methane, 100yr) = 25.

So, if methane is really to be a "clean" (meaning low-GWP) source of energy, there had better be no leaks: not around the rigs where the fracking happens, not in the pipelines that take that natural gas to power plants and homes.

But methane does leak.

This is not the ideal world, and as any homeowner knows, sooner or later some pipe in the house will leak.

The leaks around a fracking field can be as high as 9% of the recovered methane. That's enough to make natural gas a much less "clean" fuel, in the context of global warming, than coal.

Pipelines to users, exposed as they are to varying temperatures, vibrations, aging, and other realities, leak also. A team of scientists have taken a natural gas sniffer along roads all over Boston, MA, looking for any leaks. The picture is not pretty. 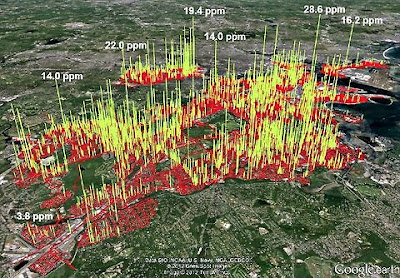 In the image, the height of the spikes indicate the methane concentration at that location. Yellow indicates a concentration higher than 2.5 parts per million. In Cambridge, you can see Harvard and MIT light up.

More bad news comes from the recent IPCC report on climate change, in which the global warming potential of methane has been revised: its GWP is not 25 as stated in previous IPCC reports, but actually 34. So all those leaks are having a larger contribution to global warming than previously thought.

Even that is not the end of the story.

It was recently found that if you were to suddenly increase the carbon dioxide in the atmosphere, a third to half of the resulting climate change would occur in the first ten years following the increase.

Because methane has a shorter lifetime than carbon dioxide, the 20-year GWP of methane is much larger than its 100-year GWP. The latter has also been revised up by the IPCC, from 72 to 86.

The reason this is worrisome, is that methane has its own hockey-stick, its concentration rising sharply since the beginning of the Industrial Revolution. This contribution could increase greatly over the coming years, as the US is steadily shifting from coal to natural gas, and as other countries around the world, such as the UK and the Netherlands, are getting into the fracking gambit.

It's not just fracking of shales. Methane can be won from clathrates or "fire ice", a special structure of water ice with methane trapped inside. Vast deposits of clathrates are found deep in the oceans, and especially the Japanese have been interested in developing it as a substitute for nuclear energy which has recently been shown to be fraught with risk.

In addition, huge quantities of methane is trapped inside permafrost, for instance in the Siberian tundra where the subsoil remains frozen year round. If the permafrost thaws as global warming proceeds, the methane will be released from the permafrost and hasten the global warming, in a vicious cycle which scientists call positive feedback.

To see what it might mean for the future of the human race, watch "Last Hours", a video by Thom Hartmann that explores the potential threat of runaway global warming that could be triggered by the sudden release of frozen methane. 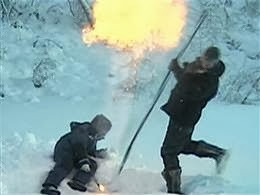 Click on image for NBC segment on methane in permafrost.

The feedback may have already begun, with the release of methane from the East Siberian Arctic shelf, following the retreat of arctic ice.

In a classroom, "positive feedback" is when your teacher pats you on the back and says "Great job!" This is not that kind of positive feedback. In the context of global warming, you want to stay away from positive feedback as far as you possibly can: the methane feedback cycle can be truly vicious.

NOTE added 27 February 2014: There is NO scientific evidence that a positive feedback has kicked in. While methane levels are high (and increasing), they would have to be much, much higher to trigger "runaway global warming". Scott Johnson de-bunks the claims of a "methane emergency" (and the subsequent extinction of the human race by 2035) in this well-argued post.

You may also like:
1. Notes to myself on Radiative Forcing and Global Warming Potential
2. Let's Talk with Our Children about Global Warming