Google Car: the case for the improbable

When I was a freshman, and an international student newly arrived in the United States, I learned to my astonishment that "breakfast cereal" means not Kellogg's corn flakes or Alpen Muesli - the only ones I had encountered before - but an entire isle of variously shaped and coloured offerings. My first grocery shopping trips where always whole-afternoon affairs.

I also found out about this game called football. Where feet are hardly used at all. Apart from that the rules were all mystifying to me: even the shape of the ball was something I'd never seen before, like a lemon gone wrong. Of course, there are plenty of other games with obtuse rules, such as cricket or snooker, and odd ways of keeping track of the score, such as in tennis or snooker, and creative and unusual orders of hitting the balls, such as in pool - or snooker.

My freshman year was the first year my dorm had gone co-ed. There were plenty of kind upperclassmen who were eager to explain the rules of football to a foreign newcomer. But I waved away the kind offers, and set out to divine the rules just from watching the games. It was a jumble. Here were these guys with shoulders like the Incredible Hulk's and legs like Rudolf Valentino's, huddling, bending, throwing the ball in the wrong direction, and then all running around in incomprehensible patterns that made my friends shout an appreciative "Yeah!" I remained throroughly mystified. 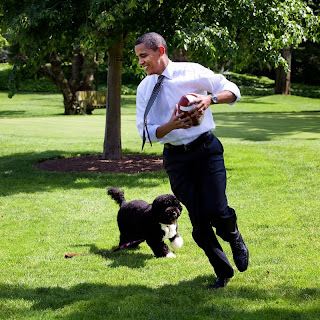 [The Obamas' dog probably has a better idea of why he's running than I did about the rules of football.]

But one day I wandered outside, into a pickup game of touch football. My friends invited me in, on the principle of learning by doing. It was kind of them: really, I had no clue what was going on.

So one of my friends took me aside, and told me, "All you really need to do is get around everybody and touch the other guys' quarterback".

"That guy over there. Jon."

They told me where to stand, opposite a line of big guys trying to look mean. I hunched over, imitating everybody else. When Jon had done the incomprehensible counting and received the ball, I darted around the guys on the front line and patted him on the shoulder.

I can still see the look on his face, a mixture of dismay and disbelief, as he's looking over his shoulder, readying that ball for the throw.

"How did SHE get here?" he finally managed to get out.

There followed a series of recriminations directed at the linemen who were supposed to keep me out. It became the joke of the dorm for a while.

I suppose they were expecting me to try to barge through (no way: I had no intention of getting hurt). Or maybe they had discounted the green girl on the other team. Or maybe there's a tradition that going around linemen was not done. Jon the quarterback had his eye on the beefy guys on my team, and taking his time throwing that ball (I mean, I wasn't that quick, even back then). In other words, I had got through by doing an unexpected thing. 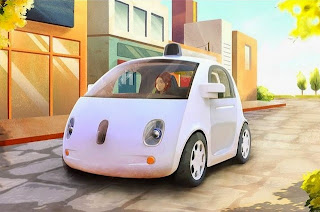 I was reminded of this story when I first saw a picture of the Google car, which resembles an oversized toaster more than a road-worthy vehicle. It looks like a toy not a car. It runs on an electric motor. It has no steering wheel: You don't need a driver's licence to ride it. Heck, you don't even need hands. Or eyes. So you can text all through the ride. And it's adorable.

This new car has "improbable" written all over it.

Not only that, the car was unveiled not at a car show but a conference in Silicon Valley. In short, Google is doing everything the automotive industry doesn't do. And it's working: people love this car. If traditional car makers don't scramble, it just might leave them in the dust.

Me? I haven't met the Google car in person. But I can see how it will fit the bill for my car of the future.

You may also like:
1. Seven Ways to Keep Your Teen from Texting While Driving
2. The Car of the Future