President Obama's new plan to combat climate change makes much of energy efficiency, which is a much more popular way to go than advocating a lifestyle change (political suicide) or less gridlock-inducing than a carbon tax (the fastest way to effect lifestyle change). Instead, Mr. Obama chose to highlight the EPA's tightened fuel efficiency requirements for new cars (CAFE), and upcoming efficiency standards for appliances and building construction.

These are all steps in the right direction, but the president was vague on the approval or not of the Keystone XL, the pipeline that is to transport bitumen from Canada's tar sands to the Gulf of Mexico for refining. The controversy around the Keystone XL pipeline tends to centre around the environmental risk, job creation and US energy independence.

It seem foolhardy to rip out boreal forest, dig a 10-mile gash in the surface of the planet, and cart it all off, risking highly toxic spills through fragile environments (the original Keystone pipeline had more than thirty spills in its first year), only to sell the oil on the world market. On top of all that, tar sands have terrible energy efficiency. 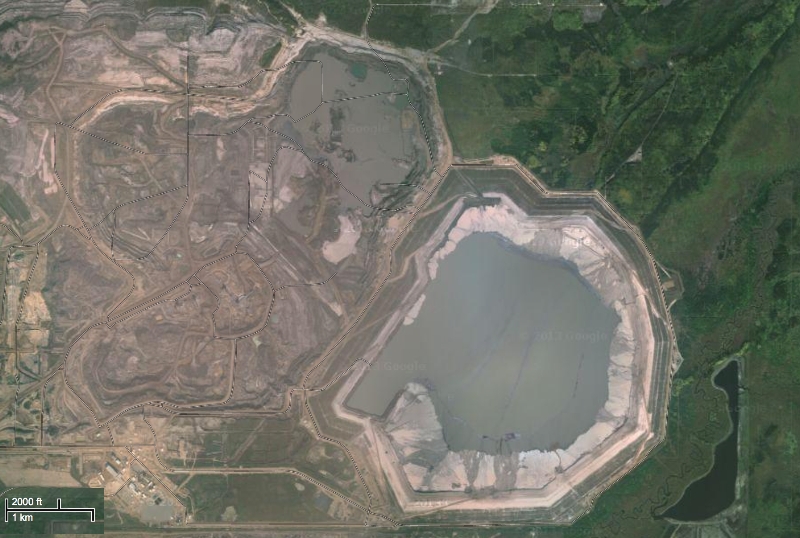 The days of gusher oil wells, where all you have to do is drill into the ground at the right place (not very deeply), and oil comes bursting out, are long gone. These days you have to spend energy to get energy: you need to drill deep, or sideways, or you need to pump the oil out, or carefully inject water to keep the pressure up. Hydraulic fracturing of shale takes immense amounts of both energy and water. The sun and the wind come to us for free, but harvesting their energy takes the building of wind turbines and photovoltaic cells, and that takes energy.

So the question we need to ask is, how much energy does it take to get one usable unit of energy from the various sources in our reach?

In the early 20th century, EROEI for oil is comfortably above 100: even pumping it out costs a lot less energy than what you get out. Currently, EROEI for oil averages around 35. For oil imported into the US, it's a lot lower, close to 12, because the transport by sea-going vessels takes a lot of energy.

For photovoltaic electricity generation, the EROEI of less than 7 seems very small, but it's still worth it because once you're built the solar panels, the energy the generated from the sun has zero carbon emissions. In the clean energy sector, nothing beats hydro-electric generation for efficiency - EROEI=100 - but you do need a good stream of water for that. 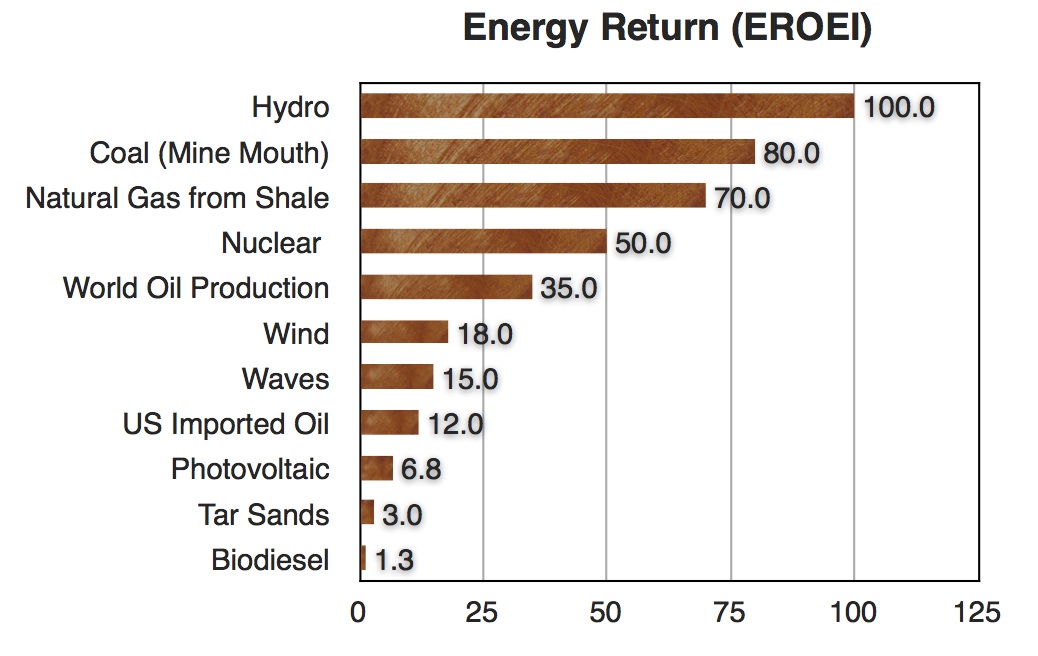 Data from geothunder and wikipedia

From the graphic you can see why coal is so attractive: digging it up takes very little energy compared to what you get out when you burn it. This is why in China, which has vast coal reserves, so many power plants run on coal, even though it contributes to both carbon emissions and smog.

[As an aside, the fuel with the very smallest EROEI is biodiesel. This is because growing the corn from which biodiesel is extracted requires oil: to work the fields, to fertilise it, for the herbicides, etc. Agriculture is a very oil-intensitive activity, and for biodiesel the EROEI is just 1.3. Remember that EROEI=1 is the breakeven point, where you put in as much energy as you get out: so what's the point of doing it?

Getting 30% return on your money is really good. But on energy it's not worth it. Especially considering all that corn could be better used for feeding people.]

Compared to the other fossil fuels, the return on tar sands is paltry: only around 3. That means that for every 3 barrels of oil won from tar sands, you have to give up one to get the next three barrels.

Put another way, a Prius (50mpg) running on high-EROEI oil emits 0.47 lbs CO2 per mile (because the well-to-pump efficiency of producing gasoline is about 83%). The same Prius running on gasoline extracted from tar sands would emit 0.71 lbs CO2 per mile, the equivalent of 33mpg.

In other words, running a Prius on tar sand oil eliminates, in one fell swoop, all the fuel efficiency gains from having the hybrid drive.

Given that energy efficiency is a big part of the new policy: why is the Keystone XL pipeline even a discussion?