Audi, a relative latecomer to the SUV scene, launched the Q5 in 2008, in the depths of the financial crisis. Despite the unfortunate timing of the introduction, I regularly see Q5's on the road. 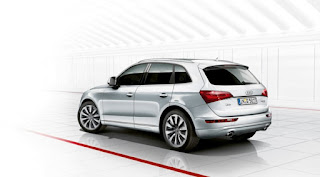 Here in the US, the Q5 is classified as a "compact SUV": poor naming. In Germany (and in France also) it is known simply as "SUV". In the Netherlands it is called a "Mid-size SUV". The Dutch logic is impeccable: after all, the Q5 is the middle of Audi's SUV range, between the Q3 and the Q7. The German splash page for the Q3 is obviously directed to younger drivers: "Developed from new demands", while the splash for the seven-seat Q7 is more sedate; "From the inventor of the quattro".

From the splash pages for the Q5, I get this uncomfortable feeling that this car is directed at women in my age group (who can afford it, that is). The US opening page talks about a "Sports sedan with a backpack". I wonder what that's supposed to mean (it doesn't look hunchbacked to me): Upscale soccer mom? -- Of course: upscale cello mom.

Slogans from the German Q5 splash page: "Discover the state of the art in driver assistance systems"; then the carbon emissions per kilometer and "Never again alone on the road". What this means, beside cruise control and adaptive headlights, is features like active lane assist (keeps you inside your lane) and side assist (warns you of cars approaching at high speed on the next lane - could be handy on the German Autobahn); also park assist (rearview camera coupled to a digital parking assistant). Add tea-making capability and perhaps a nice massage at the end of the trip, right in the comfort of the leather driver's seat, and you might be tempted to trade in your husband for this car.

Just kidding. I wouldn't trade CelloDad in for any car. Certainly not when it does at best 23 mpg, the way you can buy it in the US; that would be with the 2.0L TFSI engine. Quattro, of course. Automatic transmission, of course, or what Audi calls "tiptronic" transmission (auto with paddle shifters).

The hybrid version does a little better, 26 mpg according to the EPA, a disappointing gain over the gasoline engine. But the US price is $15,000 higher than that of the 2.0L TFSI. These, and the 3.0L TFSI are the only options available in the US: in the table below, I've marked in yellow the box Americans get stuck in. That's three of the guzzliest (and most expensive) Audi has to offer in the Q5. Even the Russians and the Chinese get more choice.

Germans can choose from ten options on the Q5. The diesel options are all more fuel-frugal than the hybrid. Every one of them. They are also less expensive - by up to € 18,750 (a little over $24,000) for the 2.0L TDI with 6-speed manual transmission..

Tell me: why should I buy a hybrid rated at 34 mpg (classed "B" for carbon emissions), if I can get a diesel that's rated 44 mpg (class "A"), puts out very respectable torque, and saves € 18,750 in the purchase? (NOTE: these fuel efficiency quotes are overestimates, as are all European MPG numbers; the 26 mpg US EPA rating for the hybrid is realistic).

Since we seem to be more sensitive to trim names than to carbon emissions, let us look at the naming of this SUV. In the US, the usual name inflation: "Premium", "Premium Plus" or "Prestige" - the hybrid only comes in "Prestige" trim; but the Q5 is much too large to be called an "ecotrinket" like the Smart EV.

There are no trim specs in Germany: you buy the Q5 with the engine you want, and a few features come standard with that; for the rest, you get to specify what you want in the car, down to the lighbulbs in the headlights and the accents on the console (brushed aluminium / oak / ash / walnut...) - see the price list. This is choice. Basically, the assembly instructions have your name on it (well, a number that is associated with your individual order).

Note how the Chinese website suggests that in a Q5 you can leave the traffic congestion far behind: every urban Chinese person's dream! I had the most fun with the Chinese trim names - not that I read Chinese, but you feed what's on the price list page to Google's translator, and you're set. To start with, the Q5 35 (2.0L TFSI) comes in "Standard" (标准型) trim, presumably because of the standard transmission.

The Q5 35 (2.0L TFSI quattro) is available in "Aggressive", "Technology-based", "Charming", "Dynamic" and "Luxury". I take that to be in order of advancing age group. I don't have the Chinese wherewithal to figure out what exactly is in that "Aggressive" (进取型), and why it should be so attractive.

The Q5 45 (3.0L TFSI quattro) comes in either "Athletic" or "Off-Road". That last bit is telling: it says the Chinese understand very well that this SUV is a status symbol, not a workhorse off-road vehicle: you wouldn't name a Jeep or a Ram truck "Off-road".

Note that even for the 2.0L TDI, the top speed is 119 mph. So for the US market,the 2.0 TDI still has too much power, and the Q5 could easily be outfitted with the 1.6L TDI in Audi's arsenal and still allow the collection of lots of speeding tickets on highways where the speed limit is 65 - 70 mph.

You may also like:
1. Why Discrimination is as Senseless for Cars as it is for Humans
2. How much horsepower do you need?
3. Review: BMW 1 Series