Of Convertibles and Fuel Efficiency

Let's talk about convertibles and fuel efficiency. Not so much about the kind of car that you can convert from a bath tub, let-the-sun-shine-on-me mode to a closed roof, keep-me-dry mode. I'm thinking of a shape-shifter car for the 21st century.

You see, the car shape that is optimal for high fuel efficiency on the highway is vastly different to that for negotiating city streets. Just think of trying to find a parking spot along the canals in downtown Amsterdam, or in a parking garage in New Amsterdam, a.k.a. Manhattan.

In Amsterdam, you need to parallel park your car on the left side of the road, and then you sidle out the door, holding on tight. The Dutch don't believe in safety rails, they put their faith in your common sense and good parking skills. If your car is longer than four metres or so, you get to find, and pay for, two adjacent spots (and the parking rates on those canals are usurious).

In contrast, to get savings on the highway, meaning a high fuel economy, you want a car with a nice long tail. Not the kind of thing you want to park canal-side. So if you want to do both city and highway driving in the same car, you need a shape-shifter: that is to say, a convertible.

What good is a long tail on a car?
At high speeds, the fuel efficiency of your car is determined largely by air drag: that "wind" that dogs and children love to sample by hanging out of the window.

The power you need to overcome the air drag depends on the density of the air ρ, the speed of the car v, its frontal area A, and its shape, which is characterised by the drag coefficient Cd.

You can't change the air density around where you live (ρ is fixed). You can slow down (reduce v) to get better fuel efficiency: it takes twice as much power to overcome the air drag at 70mph than it does at 55mph. And you can tinker with the shape of the car, to make Cd smaller.

For a box-shaped truck, Cd is about 0.7: that's serious drag. Most mass-production passenger cars have better aerodynamic design, and have drag coefficients varying from 0.45 for the boxy Range Rover, to 0.25 for the Honda Insight and Toyota Prius. For Cd smaller than 0.25 you're looking among a list of concept cars, or one of a kind racing cars.

One such car is the Mercedes-Benz Bionic Car, which sports a drag coefficient of just 0.19. But if your children are the broad-shouldered football playing type, this is not the car for you: it has the overall outline of a cut-off tear drop shape, so the back of the car is quite a bit narrower than the front.

That is even more true for the Aptera 2e, now out of production, that doesn't even pretend to have space for four. But it has to be said its tail is a perfect place for storing a cello. Cd=0.15. Dave Cloud's rally car pushes the drag coefficient even lower. This car is based on a Geo Metro, with its rear wheels covered by a body that stretches out to a long taper; its electric energy use is around 130Wh/mile (compared to 340Wh/mi quoted for the Nissan Leaf).

It is named the Dolphin. Its shape resembles that of a dolphin, but its drag coefficient is probably a factor of ten larger than that of its aquatic namesake. A dolphin is optimally built for having fun slicing through a dense medium (water) at high speeds and over long distances. The drag coefficient for dolphins is in the range 0.0038-0.0040. So even a fat dolphin has the envy-inducing low drag coefficient of Cd=0.004. Dave Cloud's Dolphin is one cool-looking car (and its tail is long enough to stow a string bass), but you would have trouble finding parking for it in any city.

Enter the 21st century convertible: I'll call it CelloMom's Salmon, not just for the pleasing near-alliterative half-rhyme, but also for the salmon's habit of swimming upstream, against all odds.

The Salmon, when parked in a driveway, looks like a modest passenger car that can move four or five people, plus a cello in the trunk. It has a snub-nosed rear, if that isn't too much of an oxymoron: from the back it's flat and boxy. It's easy to park, even in the close-walled parking garages of New York City. 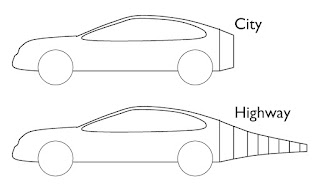 Once you're out of the city and on open road, you push a button in the dashboard (marked with the Fish icon), and panels unfold from the back to form an appendage shaped like a fish tail. It could be a telescoping mechanism that pushes out, section by section in decreasing size, both in the lateral and the vertical direction, a set of metal sleeves (or fiberglass, to keep the weight down) ending in a stubby tip bearing the licence plate.

Coming off the highway, you push the Fish button again and the tail telescopes in and stows itself neatly away. At speeds lower than 40mph a warning light on the dashboard comes on to remind you to retract the tail.

There you have it: CelloMom's Salmon Convertible Concept Car. OK, maybe it will be dubbed CelloMom's Armadillo: that wouldn't bother me. Whatever you want to call it, it should save a load of fuel.

As an added bonus, the tail looks dangerous and might deter other road users from tailgating you. Bonus number two: should it come to a collision, the tail, if designed sturdily, might add to the crumple zone at the rear of the car, for added protection of the cello in the trunk - and the occupants of the back seat.

As for the telescoping mechanism: I totally trust that this can be done, and done elegantly. After all, it will be in the hands of mechanical engineers who are no strangers to shape shifting cars. If you can build a mechanism to fold and unfold the roof on a conventional convertible, at the touch of a button and at speeds up to 60mph, designing the same for a fuel saving tail should be a walk in the park.